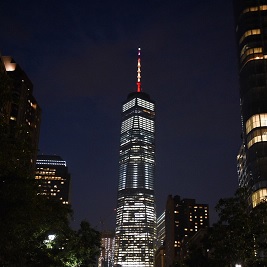 Governor Andrew M. Cuomo directed that the lights of One World Trade Center’s 408-foot spire be lit in red and yellow last evening, August 17, in solidarity with the people of Spain following the apparent terrorist attack in Barcelona.

“On behalf of all New Yorkers, my heart goes out to the victims of the apparent terrorist attack in Barcelona and their loved ones. This cowardly and senseless attack is sickening and goes against everything we believe. Those who seek to reap fear and hate will never succeed. New York stands in solidarity with the people of Spain – as they have done for us.

“The safety and security of New Yorkers is our top priority. We are in close contact with federal and local officials, and we will remain vigilant. I have directed state law enforcement officials to step up security and patrols at high-profile locations across New York, including our airports, bridges, tunnels and mass transit systems.”