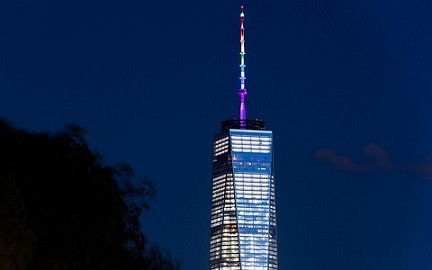 Governor Andrew M. Cuomo directed the lights of One World Trade Center’s 408-foot spire to be displayed in the colors of the pride flag in the wake of the horrific terrorist attack that took place in Orlando, Florida. New York stands in solidarity with the LGBT community and mourns the loss of the Americans whose lives were cut short by this senseless act of violence.

Governor Cuomo released a statement on the Orlando terror attack, “From Stonewall to marriage equality to protecting transgender individuals to the first-in-the nation executive action to ban conversion therapy, New York has led the way in the fight for LGBT rights. In this state, we believe that no matter your race, creed, color, gender identity or expression you have the right live your life free from persecution and prejudice.

“This senseless act of terror reminds us that there are those who seek to undermine these very values and the progress we have achieved. We will not let this happen. An attack on one is an attack on all. New York joins the rest of the nation in rejecting this hate, fear and extremism and stands shoulder to shoulder with the LGBT community.

“Tonight, I am directing One World Trade Center to be lit the colors of the pride flag in a tribute to LGBT Americans and the lives that were lost. On behalf of all New Yorkers, I extend my deepest thoughts and prayers to those affected by this horrendous tragedy.”