Governor Andrew M. Cuomo on Friday June 5th, announced the “Say Their Name” reform agenda following the murder of George Floyd and an ongoing pattern of police brutality against minority communities across the nation. The Governor said he will work with the State Legislature to get these policies done next week. 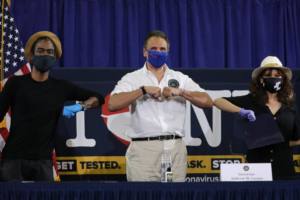 The list of policy priorities builds on earlier proposals he called for in the immediate aftermath of the killing of George Floyd and prior executive actions he has taken including appointing the Attorney General as a special prosecutor in matters relating to the deaths of unarmed civilians caused by law enforcement.

“Mr. Floyd’s murder was the breaking point of a long list of deaths that were unnecessary and abusive, and people are saying enough is enough, we must change and we must stop the abuse,” Governor Cuomo said. “Stopping police abuse vindicates the overwhelming majority – 99.9 percent – of police who are there to do the right thing. It restores the confidence, the respect, and the trust that you need to make this relationship work. You have to heal the police-community relationship for the sake of the police and for the sake of the community. As the progressive capital of the nation New York should be at the forefront of this movement, and I want to work with the Legislature to pass these policy priorities next week to reform our systems and put a stop to this abuse once and for all.”