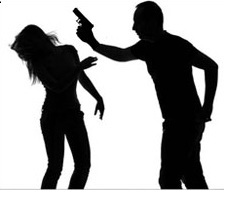 Governor Andrew M. Cuomo today signed legislation to remove guns from domestic abusers and close a loophole in state law that will ensure domestic abusers are required to surrender all firearms, not just handguns. The Governor also announced he is advancing new legislation to extend the waiting period for individuals who are not immediately approved to purchase a firearm through the National Instant Criminal Background Check System from three days to 10 days.

“In a time when gun violence continues to relentlessly torment communities across the country while our federal government refuses to act, New York must lead the charge to end this epidemic once and for all,” Governor Cuomo said. “With this legislation, we can sever the undeniable connection between domestic abuse and deadly gun violence, and continue to build upon the strongest gun laws in the nation.”

“My mother dedicated her life to helping victims of domestic violence and our family started a home to help these survivors,” said Lieutenant Governor Kathy Hochul. “We’ve seen firsthand the fear created when a gun is present in the home of an abuser. This new law today is a dramatic step forward eliminating the vulnerability of these women and their children. While the federal government fails to address the issue of gun violence, we continue to fight to keep guns out of the hands of those who could devastate our communities and our residents.”

Previously, New York law narrowly prohibited the possession of firearms for individuals either convicted of a felony or a limited number of misdemeanor “serious” offenses, excluding many misdemeanor offenses that are undeniably serious. This bill (S.8121 Phillips/A10272 O’Donnell), which the Governor signed in ceremony today, expands the list of “serious” crimes that require the loss of a gun license and the surrender 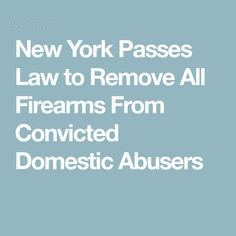 of all firearms to ensure no domestic abuser in New York retains the ability to possess a firearm once convicted of a disturbing crime.

In addition, this legislation will preclude any individual wanted for a felony or other serious offense from obtaining or renewing a firearm license. Under previous New York law, despite being subject to an arrest warrant, an individual was still legally eligible to obtain a firearm license even as police worked to locate and detain them. This change ensures that the law enforcement who are actively seeking to arrest a wanted individual, as well as innocent bystanders, are not needlessly endangered by a wanted individual who has been able to obtain new firearms.

Governor Cuomo has introduced legislation to establish a 10-day waiting period for individuals who are not immediately approved to purchase a firearm through the National Instant Criminal Background Check System. Current federal law requires gun dealers to conduct the NICS background check on a potential purchaser prior to selling a firearm, which immediately provides the dealer with one of three possible notifications. These notifications include “proceed”, “denied”, or “delayed”. In the case of a “delayed” response, the dealer must wait three days before the sale is eligible to go through, even though the FBI continues to investigate these individuals past the three-day timeframe. Oftentimes, by the time it has been determined that the potential purchaser was, in fact, ineligible, the individual has already been sold the firearm upon completion of the three-day waiting period. Extending the waiting period to ten days would allow sufficient time to complete the expanded background check and builds on legislative efforts to ensure that only those eligible to own a firearm are able to do so.