Infrastructure is the foundation of our city, usually not seen or thought of until there’s a problem. This substructure includes; maintenance and delivery of a clean water supply, a combined sewer system and 25 square miles of roads. All of the aforementioned are crumbling beneath us. The City of Syracuse had 391 water main breaks in 2014 and 2,109 breaks between 2004 and 2014.

Governor Andrew Cuomo infuriated many Syracuse area residents when he responded to a question posed (according to published reports) during an editorial meeting at the local daily newspaper. The Governor was asked “why do we need $50 million dollars for the fair?” Cuomo’s response was, “you’re going bankrupt. You are unsustainable.”  As the questioning continued when asked, “So let the pipes break?” Cuomo continued, “No. You need jobs. You need an economy. You need business. You need a viable economy. That’s what you need.”

Cuomo’s budget and past economic development initiatives have focused on public-private partnerships in an effort to create new jobs. REDCs (the Regional Economic Development Councils) have been developed a competition for funds which asks the basic question, According to Cuomo,” who has the most creative idea to generate jobs. What business can you bring in? What cluster economy can you grow? Do you want to be a solar manufacturer? Do you want to be a high-tech, advanced manufacturing nano tech? Whatever your dream is that we can invest in that can help you generate an economy. But the state should subsidize everything? That doesn’t work.”

In the meantime, Mayor Miner continued her quest to bring infrastructure to the forefront of budget discussions in Albany.  On February 25th before the New York State Legislature, Miner used her annual appearance before joint legislative budget hearing on local governments to urge leaders to make funding water infrastructure a priority.

Like a baseball player covering all bases, Mayor Stephanie A. Miner, met with U.S. Rep. John Katko March 17th to discuss the importance of funding water infrastructure in Washington, D.C. The meeting, which took place in Rep. Katko’s office, was the latest in a series of efforts by Mayor Miner to meet with federal leaders to seek assistance in addressing the City’s infrastructure needs. 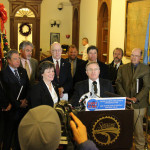 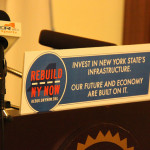 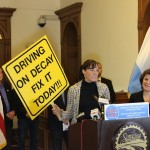 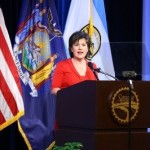 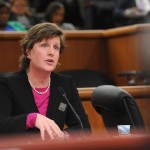 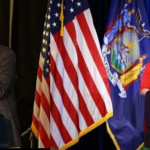 Gov. Andrew Cuomo and Syracuse Mayor, Stephanie A. Miner have argued over the need for increased infrastructure spending.

The Mayor has made repairing and replacing water infrastructure a top priority for the City of Syracuse. The City is home to 550 miles of water mains and uses an entirely gravity fed system which draws water from Skaneateles Lake. Due to the high quality of water from the lake, the City of Syracuse is one of the few municipalities in the United States and one of only two in the State of New York which has a filtration waiver from the Environmental Protection Agency.

In her latest move to draw attention to infrastructure, Mayor Stephanie A. Miner joined leaders from across New York State March 24th as part of the Rebuild NY Now coalition in calling on the legislature to include funding improve infrastructure throughout the state in this year’s budget.

“With billions in settlement funds in this year’s budget, we have an unprecedented opportunity to make investments in modernizing and upgrading our infrastructure,” said Syracuse Mayor Stephanie A. Miner. “I am pleased to join the Rebuild NY Now coalition in pushing for these important upgrades. With just a few days to go before the budget is finalized, now is the time we need to raise awareness about the importance of funding infrastructure across the State.”