Proposal Would Also Ban the Sale of Styrofoam Packing Peanuts

Governor Andrew M. Cuomo today announced the 5th proposal of his 2020 State of the State Agenda – prohibiting the distribution and use of expanded polystyrene, commonly known as Styrofoam, single-use food containers. The proposal also bans the sale of expanded polystyrene packaging materials known as packing peanuts. Additionally, the bill would authorize the State Department of Environmental Conservation to review and take action to limit or ban other packaging material upon a finding of environmental impact. This would be the strongest statewide ban in the United States and would go into effect by January 1, 2022. This ban will build on the Governor’s historic effort to reduce environmental pollution statewide, including the recent ban on single-use plastic bags first announced by the Governor in his 2019 State of the State address. 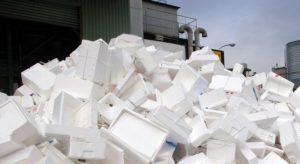 “Styrofoam is one of the most common pollutants and a public health hazard that impacts humans and the environment alike,” Governor Cuomo said. “From take-out containers to packing peanuts, this material is everywhere and it will continue to pollute our waters and harm our wildlife for generations to come if we do not act. With this proposal, we can build on our nation-leading initiatives to protect the environment and move New York another step closer to a greener, more sustainable future.”

The new legislation will:

The ban exempts prepackaged food sealed prior to receipt at a restaurant or food service establishment, as well as packaging for uncooked or raw meat, fish or eggs. Violators will be penalized with a fine starting at $250. Second, third and fourth violations will be fined $500, $1,000 and $2,000 respectively.

Expanded polystyrene foam is one of the top ten contributors to environmental litter. The EPA estimates that the U.S. produces more than 3 million tons of polystyrene, which are non-biodegradable. These containers often break down overtime and enter waterways and wildlife areas as microplastics, where they pollute water sources and harm wildlife that ingest them. Human exposure to styrene, the primary chemical in polystyrene foam, is primarily through inhalation in the manufacturing sector. The National Toxicology Program has determined styrene is “reasonably anticipated to be a human carcinogen.” Small amounts of styrene can also be transferred to food from styrene-based packaging materials.

In 2019, Governor Cuomo accomplished a key goal of his Justice Agenda when he signed landmark legislation banning single-use plastic bags in New York State. This milestone accomplishment, which goes into effect in March 2020, will prevent plastic bag litter in our environment, reduce the greenhouse gas emissions associated with plastic bag production and disposal, from petroleum used to produce the bags to emissions from the transportation of bags to landfills. New York is one of only eight states to have a single-use plastic bag ban in place.