Governor Andrew M. Cuomo today updated New Yorkers on the significant winter weather systems currently affecting most of Upstate, as well as the State’s response. Most of Upstate New York has already experienced between a couple inches to a foot of snow fall, with some parts of Western New York and the North Country getting up to a foot or more of snow. In the coming days, additional snowfall of as much as 1 to 2 feet in the most persistent lake effect snow bands, can be expected. The polar vortex that has moved in from the north continues to deliver dangerously cold wind chills and is expected to do so through Thursday.

Travel will remain difficult across the state as hazardous weather conditions threaten to impact the morning and evening commutes. Blowing snow and freezing temperatures will result in near-blizzard conditions. Under the direction of Governor Cuomo, state agencies pre-deployed assets throughout the state and remain fully engaged in helping local governments respond. Additionally, the tractor trailer and bus ban placed on several upstate highways Tuesday evening remains in effect. The State Emergency Operations Center also continues to be in a Level 3 activation to assist with any potential emergency response activities. 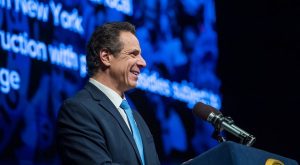 “As New York deals with another extreme weather system, I urge all New Yorkers to be diligent, take the necessary precautions to remain safe and avoid any unnecessary travel,” Governor Cuomo said. “New York will continue our efforts to place personnel, equipment and assets throughout upstate New York as the polar vortex continues to bring dangerously low temperatures and creates hazardous travel conditions.”

A strong, gusty Arctic front is pushing into the State Wednesday morning and will move eastward throughout the day. Dangerous wind chills are predicted for most of the State starting Wednesday afternoon through Thursday, ranging anywhere from 15 to 35 degrees below zero. The Arctic blast will produce heavy lake effect snow northeast of Lake Erie and Lake Ontario. Lake effect snow is expected to continue southward over the metro Buffalo area and the Tug Hill Plateau areas throughout the day Wednesday.

There is an increased risk for frostbite and hypothermia due to the dangerously low wind chill temperatures. Governor Cuomo advised New Yorkers to stay indoors and, if they must be outside, to limit exposure and dress in several layers. Frostbite can occur in less than 20 minutes. Pets should be kept inside as much as possible.

Increasing winds and strong gusts could result in near-blizzard conditions Wednesday and Thursday. The rest of the State can expect frigid temperatures and, due to frequent gusting winds, may experience difficult travel, including snow squalls. Extreme caution should be exercised when traveling anywhere across the State today. If you must travel, reduce speed, keep a safe distance and keep a winter survival kit in your vehicle.

As of 8 p.m. Tuesday night, tractor trailers and commercial buses have been banned from the New York State Thruway from Exit 46 (Rochester I-390) to the Pennsylvania border as well as Interstate 190, Interstate 290, State Route 400, U.S. Route 219 from Peters Road to Interstate 90; and State Route 5 from State Route 179 to I-190.

Beginning at noon Wednesday, tractor trailers and commercial buses will be banned on Interstate 81 from the Canadian Border to State Route 104.

The bans will last for the duration of the storm.

The Division of Homeland Security and Emergency Services will coordinate with state agencies and local governments to ensure resources from the State’s ten regional stockpiles are available for deployment throughout the weather event. Staff at the State EOC and regional personnel are prepared to respond to any issues as necessary.

The State Department of Transportation is ready to respond with 1598 large plow trucks, which include 98 reserve trucks. The Department has 51 tow plows, 326 large loaders, 39 snow blowers, 20 graders, 202 medium duty and pickup trucks with plows, 34 tractor trailers, and more than 351,000 tons of salt on hand. This equipment, as well as nearly 3,900 operators and supervisors, will be deployed as necessary in advance of the winter storms to help keep roads safe.

Motorists are reminded to check 511NY before traveling at or by downloading the mobile app. The free service allows users to check road conditions and features a winter travel advisory system with real-time travel reports and a color-coded map indicating which state roads are clear, wet or snow covered. The system provides motorists with a helpful resource to determine if travel is advisable.

The Governor also recently announced that the State Department of Transportation launched a new public education campaign to promote safe driving in winter conditions.  A new website, videos and social media campaign will encourage motorists to drive safely in snow and ice conditions, and urge drivers to give snow plows enough space to operate safely.

Thruway Authority
The Thruway Authority has 669 supervisors and operators ready to deploy 244 Large Snow Plows, 126 Medium Snow Plows, 11 Tow Plows and 58 Loaders across the state with more than 107,000 tons of road salt on hand. Variable Message Signs, Highway Advisory Radio and social media are utilized to alert motorists of winter weather conditions on the Thruway. The Thruway Authority has deployed additional resources to the Western New York Region to assist with the storm. In addition to extra staff from surrounding Thruway divisions, we have also repositioned extra equipment such as large snow plows, medium snow plows, large loaders, and a tow plow.

The Thruway Authority encourages motorists to download its mobile app which is available to download for free on iPhone and Android devices. The app provides motorists direct access to real-time traffic and navigation assistance while on the go. Motorists can also sign up for TRANSalert e-mails which provide the latest traffic conditions along the Thruway.  For real-time updates, motorists can follow @ThruwayTraffic on Twitter or by visiting www.thruway.ny.gov to see an interactive map showing traffic conditions for the Thruway and other New York State roadways.

New York’s Division of Military and Naval Affairs
The New York National Guard has activated 80 service members to assist with state storm response missions. Members will be deployed in teams with 20 vehicles to provide transportation support, whether it be personnel or supplies, as well as to support some debris clearance.

The Department of Public Service is in contact with utility senior executives to ensure that the utilities are prepared for inclement weather, and it will be closely monitoring utility storm-preparation efforts to ensure that utilities stand ready to minimize outages and speed outage restorations.  Electric and gas utilities, as well as telecommunication service providers, such as Verizon, are closely watching as the storm develops and prepared to bring on additional personnel to minimize service disruptions, if they occur.

Utilities are prepared to respond 24 hours a day to utility service disruptions and are mandated to implement their emergency response plans, when needed, which includes performing proper messaging to alert customers to the expected frigid temperatures as well contacting customers on life-support equipment and other critical customers. Department staff will continue to monitor the utilities’ efforts during the storm event.

Utilities can provide customers with storm and safety information or customers can call the Department’s Call Center for information. The PSC Help Line can be reached by calling 1-800-342-3377.

New York State Police
The New York State Police are increasing patrols by 25 percent in the affected areas and stand ready with additional personnel as needed. All four-wheel drive vehicles are deployed and all specialty vehicles, including snowmobiles and Utility Task Vehicles, are staged and ready for deployment. Since the start of this storm, Troopers have responded to approximately 400 crashes, including one fatality involving a tractor-trailer in Delaware County, and have handled more than 350 disabled vehicles.

Office of Temporary and Disability Assistance
With the storm coming and severely cold temperatures expected over the next several days, a Code Blue is likely to be in effect throughout much of the state. When air temperatures are at or below 32 degrees Fahrenheit, including wind-chill, local social services districts must take necessary steps to ensure homeless individuals have access to shelter, and that shelter hours are extended, under the state’s Code Blue regulation.

Some of the most important tips for safe driving include:

The leading cause of death and injuries during winter storms is transportation accidents. Before getting behind the wheel, make sure that your vehicle is clear of ice and snow; good vision is key to good driving. Plan your stops and keep more distance between cars. Be extra alert and remember that snowdrifts can hide smaller children. Always match your speed to the road and weather conditions.

It is important for motorists on all roads to note that snowplows travel at speeds up to 35 m.p.h., which in many cases is lower than the posted speed limit, to ensure that salt being dispersed stays in the driving lanes and does not scatter off the roadways. Oftentimes on interstate highways, snowplows will operate side by side, as this is the most efficient and safe way to clear several lanes at one time.

Motorists and pedestrians should also keep in mind that snowplow drivers have limited lines of sight, and the size and weight of snowplows can make it very difficult to maneuver and stop quickly. Snow blowing from behind the plow can severely reduce visibility or cause whiteout conditions. Motorists should not attempt to pass snowplows or follow too closely. The safest place for motorists to drive is well behind the snowplows where the roadway is clear and salted.

Dress for the season

Prolonged exposure to cold temperatures can cause hypothermia, especially in children and the elderly. Watch for these symptoms:

People working or playing outdoors during the winter can develop frostbite and not even know it. There is no pain associated with the early stages of frostbite, so learn to watch for these danger signs: