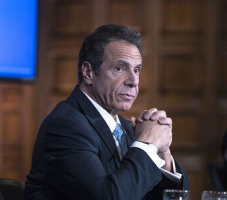 AUDIO of the Governor’s remarks is available here.

A rush transcript of the Governor’s remarks are available below:

After the movie, one of my daughters says to me, you know, that that was really amazing how you figured out what was going to happen in that movie? I let her sit with that for a couple of minutes. And then I had to tell her the truth, which is, I said, no, I saw the movie already. It wasn’t brilliant analysis of the plot; I saw the movie. We have seen the COVID movie.

We’ve seen this movie. I’ve seen this movie. Melissa has seen this movie every day through the briefings. Rick Cotton runs the airports among other things, one of the first people to get COVID because it was coming through the airports. He’s seen the movie. Beth Garvey saw the movie. She had to write all the laws. Janno Lieber saw the movie at the MTA. We had to figure out how to disinfect subway cars because the first piece of bad information was surface transmission, remember that? So, we had to come up with all sorts of chemicals and PPE, and then he had an operate a system with no riders. Rob Mujica dealt with it every day in the financial chaos.