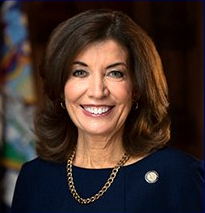 On Friday May 6th Governor Kathy Hochul  issued a letter urging Congress to take action to protect abortion services and access to care.

“When New York legalized abortion three years before Roe v. Wade, our state served as a safe harbor for those seeking abortion care, and with Supreme Court threatening to strike down Roe, we stand ready to once again welcome those in need,” Governor Hochul said. “I urge Congress to act immediately to safeguard abortion access across the nation and ensure that states like New York have adequate support to accommodate additional patients who will need our help. I am proud to continue New York’s long tradition of being on the forefront of equal rights and reproductive health. New York State is a blueprint for access to abortion, one that states across the nation should follow. Now is the time for decisive, bold action to ensure that abortion remains safe, legal, and accessible for all who need it.”

Read the full text of the letter below:

On May 2, a leaked draft of the upcoming Supreme Court decision in Dobbs v. Jackson Women’s Health abruptly threw into question reproductive rights protections established by Roe v. Wade nearly 50 years ago. The expected Supreme Court decision will remove legal protection for abortions, denying the basic human rights of women and relegating determinations about abortion rights and reproductive health to the states.

New York legalized abortion in 1970 – three years before the landmark Roe v. Wade decision. In that time, New York served as a safe harbor for women seeking care, with health officials estimating that more than 400,000 abortions were performed in the state in the first two years after the legalization, of which two-thirds were for women who traveled from out of state. Now, if Roe is overturned, we could expect at least an 11 to 13 percent increase in out-of-state patients traveling to New York for abortion care. History will repeat itself.

I am proud to continue New York’s long tradition of protecting women’s rights and reproductive health, and I stand ready for New York to once again serve as a safe harbor for those who need abortion care. But we cannot do this alone. I applaud the House for its passage of the Women’s Health Protection Act. Next week, the Senate will once again take up this legislation in an attempt to codify abortion rights and the protections of Roe. I urge you not only to enact this legislation and protect access to abortion – as we have already done in New York – but also to address other insidious barriers that impede access to reproductive health care.

Congress must immediately act to protect abortion services and access to care across the nation, taking steps including but not limited to:

In New York, my team and I are working tirelessly to provide access to quality, affordable healthcare – including abortion services. Under my direction, New York State’s Department of Health finalized regulations aligning New York law with clinical standards to provide a safe medical experience for patients, free from stigma. New York providers can offer abortion telehealth services without unnecessary barriers. We have convened an Abortion Access Working Group, meeting regularly with patients, providers, and advocates to guide state policy and respond to on-the-ground needs. And in our recently-passed State Budget, we enshrined into law a requirement for health plans to cover abortion services without cost-sharing.

New York State is a blueprint for how reproductive health services, including abortion, can be structured with a focus on real people’s experiences and needs, not political rhetoric. Now is the time for decisive, bold action to ensure that abortion remains safe, legal, and accessible for all who need it.