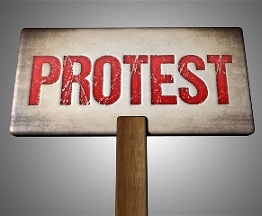 Local grassroots groups have been protesting against Rep. John Katko outside of the Dewitt Wegmans, 6789 E Genesee St, Fayetteville. These groups most recently planned a protest for February 17th, 11 am.

This was the third planned weekly protest organized by these groups. Their previous protest tallied over 30 people. Protesters have been gathering on the sidewalk of Wegmans directly across the street from the Talbots. Protesters are demonstrating against Rep. Katko’s inaccessibility, his policies, and his enabling of the Trump administration.

These are weekly events.