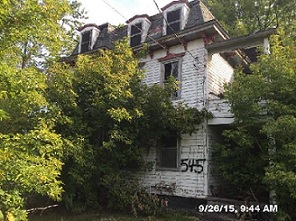 The Greater Syracuse Land Bank was one of 19 land banks awarded grant funds by the Office of the NY Attorney General on Friday, March 24th. The Greater Syracuse Land Bank was one of only two land banks awarded a full $2 million. These funds will enable the Land Bank to demolish 56 blighted structures such as 545 Oakwood shown below and, through a partnership with Home HeadQuarters, Inc., to renovate 8 homes to be sold to income-qualified owner-occupants. “These funds from Attorney General Eric Schneiderman are critical to our community,” said Kerry Quaglia, Chief Executive Officer of non-profit community development organization Home HeadQuarters. “This investment in Syracuse neighborhoods means the Greater Syracuse Land Bank and its partners are able to get vacant properties back into the hands of homeowners and back on the tax rolls.” 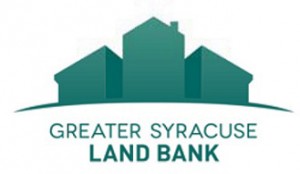 The Greater Syracuse Land Bank was awarded more funding than any other land bank in the first two rounds of mortgage settlement funds distributed by NY AG Eric Schneiderman’s office – $5 million which has funded the renovation of 68 homes for sale to income-qualified owner occupants and the demolition of 43 blighted structures. The land bank has acquired, sold, and demolished more properties than any other in New York as they pursue a strategy of combatting blight by attracting private investors to purchase and renovate blighted properties. To date, the Greater Syracuse Land Bank has sold 425 properties, into which the buyers are investing nearly $16 million in private capital toward renovations. Those properties, now back on the tax rolls, are generating nearly $800,000/year in local property taxes.

“I congratulate the Land Bank on their award from the Attorney General. They continue to do remarkable work revitalizing our neighborhoods and demonstrate results that are worthy of investment,” said Syracuse Mayor Stephanie A. Miner. “I was proud to support the formation of the Land Bank in 2012 and I have beengratified by its success. This funding will support their efforts to rehabilitate properties across the City, breathing new life into our historic neighborhoods.”

Katelyn Wright, the Land Bank’s executive director, stated, “We’re honored to receive these funds from the Office of AG Schneiderman. So far our model of enlisting private individuals in renovating homes is working, but we can rarely attract private financing for demolitions. We’re behind on demos and the most common complaint we get is about land bank properties just sitting around with nothing happening, which is because we have over 200 properties on our demo list. This will go a long way toward helping us catch up and eliminate blight in people’s neighborhoods.”