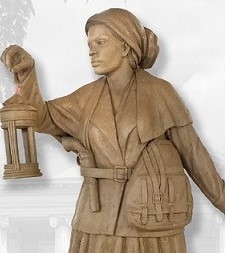 A commemorative statue of Harriet Tubman will stand tall at the New York State Equal Rights Heritage Center set to open its doors later this year. The 7 1/2-foot sculpture depicts the young freedom fighter traveling by night in the midst of one of her great journeys, holding out a cautionary hand to her followers as she leads them to freedom. The Heritage Center will emphasize New York State’s progressive history of promoting social and equal rights, while encouraging tourism at the region’s many attractions and destinations. This announcement complements the Central NY Rising initiative, the region’s comprehensive blueprint to generate robust economic growth and community development.

When completed, the statue will rest adjacent to the main entrance of the New York State Equal Rights Heritage Center and feature native landscaping and pavers that will welcome visitors to gain a more intimate look at the equal rights heroine.

George and Mary Cuthbert said, “This beautiful statue of Harriet will serve as a reminder and at the same time, provide inspiration for us, our children and future generations. Harriet is a true American hero.” The statue is being donated by the George and Mary Cuthbert Family of Auburn, in honor of George Cuthbert’s father, Ed.

New York State Parks Commissioner Rose Harvey said, “Whether it is civil rights, women’s rights, human rights or equal rights for all, New York State has always enlightened the nation. The addition of this Harriet Tubman statue at the New York State Equal Rights Heritage Center will be a focal point in recognizing and honoring the legacies of all those who served as pioneers before us and continue to inspire future generations in the fight for justice and equality.”

Auburn City Mayor Michael Quill added by saying, “Auburn is proud to be Harriet’s hometown.  She lived the final 50 years of her life here and the NYS Equal Rights Heritage Center will offer to the public a glimpse as to why she chose to live in Auburn and our region.  Harriet was an ordinary person but her life story includes many heroic chapters of her constant pursuits to fight for freedom.  Her legacy lives on here through her home, her church and the work of many of her descendants that call Auburn home.  This generous gift of the statue and its placement at the entrance of the new center will allow people to discover her amazing story within the context of the role many New Yorkers have played in our nation’s steady pursuit for all people to live free.”

“I am grateful to George for his generosity to help fund this important artwork. The sculpture of this venerable warrior to humanity, will educate and inspire many visitors to learn more about Harriet Tubman. It is through this medium of art, clay and bronze, that I am able to convey this strong and courageous woman. This historical pillar will enhance both the aesthetic as well as spiritual landscape of Auburn” stated sculptor, Brian Hanlon.

Last year, Governor Cuomo announced $10 million had been awarded to the City of Auburn for a new Heritage Center to be built in the South Street National Register Historic District, located directly across from Memorial City Hall and next to the William H. Seward House Museum.

The 7,500-square foot facility will include exhibition and community spaces, interactive maps and videos that will educate and highlight the role the State and New Yorkers have played in the struggle for women’s rights, abolition, civil rights and the more recent efforts for LGBTQ rights.

The Equal Rights Heritage Center will be operated through a partnership with the Cayuga County Office of Tourism and the Auburn Downtown Business Improvement District. The Center is expected to be completed this fall.

Today’s unveiling of the Harriet Tubman Commemorative Statue also coincides with the 100th anniversary of women’s suffrage. Governor Cuomo has commissioned a 14-member NYS Women’s Suffrage Commission, chaired by Lieutenant Governor Kathy Hochul, to plan and execute statewide programs to commemorate the anniversary. The commission will continue through 2020, a century after the ratification of the 19th Amendment, which granted all women in the United States the right to vote.

The State has already invested over $4.7 billion in the region since 2012 to lay the groundwork for the plan – capitalizing on global market opportunities, strengthening entrepreneurship and creating an inclusive economy. Today, unemployment is down to some of the lowest levels since before the Great Recession; personal and corporate income taxes are down; and businesses are choosing places like Syracuse, Oswego and Auburn as a destination to grow and invest in.

Now, the region is accelerating Central NY Rising with a $500 million State investment through the Upstate Revitalization Initiative, announced by Governor Cuomo in December 2015. The State’s $500 million investment will incentivize private business to invest well over $2.5 billion – and the region’s plan, as submitted, projects up to 5,900 new jobs. More information is available here