Those attending the Walsh Inaugural Ball were treated to some of the best food and entertainment Syracuse has to offer.  Within the walls of a now vacant Post-Standard Building on the second floor, there’s a party going on. The live band played James Brown among other crowd favorites, and the DJ had the dance floor full all evening.  Surveying the room and listening to comments by some in attendance it was clear, this was not your average Syracuse Mayoral Inaugural Ball.

Just as with Mayor Walsh’s swearing- in ceremony at the Landmark Theater, which starting with the familiar sounds of a precision drill team followed by Bagpipes. The Inaugural Ball was an eclectic gathering of people who were in some way connected with the campaign. In addition, the event attracted those who just wanted to be there to congratulate the new Mayor, and partake in the festivities.

People donned their finest attire which meant plenty of gowns, tuxedos, and well quaffed hair.  As one longtime participant in the Syracuse political scene noted, “These are all new faces, this is the new Syracuse.” 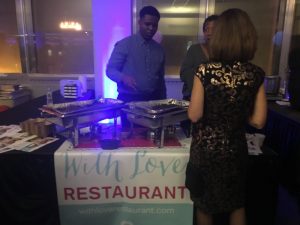 With Love… served up 3 varieties of Collard Greens

Organizers had the requisite photo station, where attendees posed for pictures with the evening’s motif prominently displayed on all backgrounds.

The hallmark of this event was the inclusion of a plethora of Syracuse area food vendors. Vendors included but not limited to; Funk ‘n Waffles, Otro Cinco, Pastabilities, The Stoop, Soup R Salads, Hofmann Hot Dogs, With Love restaurant, Dinosaur Bar-B-Que, Kevi’s Treats, Crave, Freedom of Espresso and Glazed & Confused Donuts. From Brisket to Collard Greens, companies serving at various food stations are all recognizable, adding a Taste of Syracuse touch to the well-attended event.

Saying a good time was had by all, is an understatement. As the Mayor took to the dancefloor to a popular rap/hip hop song he was surrounded by partying supporters shouting, “Go Ben…. Go Ben… Go Ben”.