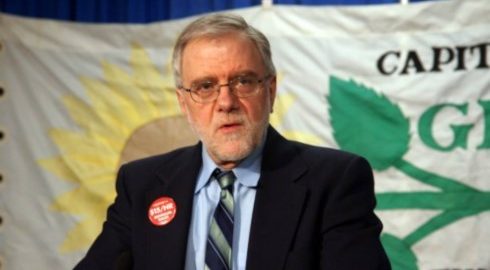 Syracuse – On May 4th Green gubernatorial candidate Howie Hawkins stood in front of a demolished public housing site in Syracuse to call for a massive expansion of public housing as a way to make housing affordable in New York State. Hawkins also advocates for an expansion of rent control statewide.

“Quality, safe public housing puts downward pressure on private rents. It compliments rent regulations in cities that have them. New public housing should be built in the cities and the suburbs as high-quality, mixed-income, humanly-scaled, scatter-site, green-building projects,” Hawkins said.

“This new public housing program will be a jobs program, a desegregation program, and a clean energy program as well as an affordable housing program. These high-quality projects will improve the quality of life in every community in which they are built,” Hawkins said.

Hawkins said that the old large-scale public housing projects concentrated poverty and segregated minorities. New York’s metropolitan areas are among the nation’s most segregated cities by race and class. Metro Syracuse is the most racially segregated city in the nation with a population between 100,000 and 1 million.

Hawkins was joined by former residents at the site of the former 400-unit Kennedy Square low-income public housing on S. Crouse Ave. The site is now a staging area for parking, equipment, and materials for construction workers who were busy as Hawkins spoke building upscale apartments across E. Fayette St. for the Syracuse University community with rents ranging from $1,400 to $2,500 a month.

Hawkins criticized Governor Cuomo’s 5-year $20-billion housing investment program announced in 2016 because almost all of the money goes to private developers as grants, tax credits, or low-interest loans instead of going to municipal public housing authorities.

“These so-called public/private partnerships are rife with pay-to-play corruption. The poor management, degradation, and finally destruction of Kennedy Square is a case in point. 400 units of affordable housing was destroyed, with no affordable housing built to replace them. Instead, COR Development got the site from the Empire State Development via Upstate Medical University in a no bid, no money down deal,” Hawkins said.

COR announced in 2011 that upscale housing and commercial space that catered to Upstate’s needs would be completed by 2016. Nothing has been built to date.

All the principals in the Upstate/COR deal at Kennedy Square have been caught up in corruption charges related to this and other deals, including David Smith, former President of Upstate Medical University; Alain Kaloyeros, once head of SUNY Polytechnic Institute and Cuomo’s chief development strategist; Steven Aiello and Joseph Gerardi, partners at COR Development, and Joseph Percoco, formerly Cuomo’s campaign manager and closest aid in office.

“Public housing operates at cost for public benefit, not for private profit, and is less susceptible to pay-to-play schemes. It is more efficient than subsidized private housing. Building maintenance expenditures are based long-term maintenance, not short-term investor profits. The staff are union workers with job security, not property managers, whose job security requires keeping costs low and profits high for absentee landlords. It gives security to tenants, who are not subject to landlord whims,” Hawkins said

Hawkins said the initial plans of the Syracuse Housing Authority to redevelop its properties near Interstate 81 as a mixed-income, mixed-use community well-served by public transportation is the kind of public housing design he supports. He supports the Community Grid option to replace the I-81 elevated highway and wants to see quality public housing developed there as well when that land becomes available.

The New York City Housing Authority needs an investment $25 billion just to bring its projects up to a decent standard by removing mold and lead paint, fix heating and cooling systems, and other repairs. Hawkins said the NYCHA investment should be part of a larger state commitment to improve existing public housing and radically expand the supply of public housing.

Hawkins said the housing affordability crisis reaches well into the upper-middle-class in New York’s cities. Over 50% <https://www.osc.state.ny.us/reports/housing/affordable_housing_ny_2014.pdf> of New York renters now pay more than the federal affordability standard of 30% of household income. More than 25% pay more than 50% of their income in rent.

In Syracuse, 53% of renters <http://npcnys.org/wp-content/uploads/2016/03/syracuse_snapshot.pdf> spend 30% or more of their income on housing and 29% spend over 50% on rent. 3,000 people <http://www.syracuse.com/opinion/index.ssf/2016/05/syracuse_housing_crisis_traps_low-income_families_your_letters.html> are on waiting lists in Syracuse for one of the 3,500 public housing units in the city. 6,800 additional people are on the waiting list for section 8 vouchers – now referred to as the Housing Choice Voucher (HCV) Program – which subsidize the renting from private landlords.

Hawkins said the projects should be built with green building designs. They should produce more clean energy than they use through solar and wind power and heat pumps for heating and cooling. They should also fight global warming by capturing greenhouse gases through carbon-sequestering building materials and living roofs and walls.

To help with housing affordability, Hawkins said he also supports repeal of the Urstadt Law to establish municipal home rule on rent regulations, rent stabilization coverage for all Mitchell-Lama and project-based Section 8 buildings that have left government supervision, and a rent affordability “circuit breaker” through an income-based tax credit to cap rents at 30% of household income.

Hawkins would fight housing segregation with stronger enforcement of existing fair housing laws, a state law banning discrimination based on source of income such as Section 8 housing vouchers, and a state inclusionary zoning law to require a mix of low-income, moderate-income, and market rate units in new or substantially rehabilitated housing developments.

“But these reforms are not enough to really bring downs rents to affordable levels. New York must directly increase affordable dwellings to ease the price pressure in private rental markets by constructing large numbers of municipal public housing units available to any residents of any income level. With higher rents for higher-income residents, these projects will be self-sustaining and contribute to desegregating New York’s metropolitan areas, which are among the most segregated cities in the nation by race and class,” Hawkins said.

Hawkins said the original idea <https://www.citylab.com/equity/2018/04/out-of-a-national-tragedy-a-housing-solution/557381/> of Kennedy Square was good: a mixed-income development that would be 70% middle-income, 20% low-income, and 10% elderly. It was fully financed by the Urban Development Corporation, with 90% of the money coming from the federal Housing and Urban Development department. Kennedy Square was completed in 1974.

The flaw, Hawkins said, was that the construction, ownership, and management was given to private companies. Just as Kennedy Square opened, President Nixon put a moratorium on new housing subsidy programs, including the Section 236 subsidies used for Kennedy Square. Then the state legislature refused to appropriate more than $100 million to repay UDC bond anticipation notes, forcing UDC into default. The private owners of Kennedy Square then secured a 40-year HUD contract of subsidies for low-income tenants, making Kennedy Square an exclusively low-income project. As the contract approached its termination, the private owners focused on maximizing profits and neglected maintenance. Empire State Development took public ownership of the project in 2001, but did not invest in its rehabilitation.

In October 2007, ESD told tenants they had 90 days to move out. The next month, SUNY Upstate Medical University signed an agreement with COR Development Company to redevelop the property, even before ESD have formally conveyed the property Upstate, in a no-bid, no-money-down deal <http://www.syracuse.com/news/index.ssf/2016/09/how_cor_won_prime_state_land_in_syracuse_with_no_bid_no_money_down.html> . In 2011, a joint venture was formed owned 75% by COR and 25% by Upstate with no public bidding, no money down, and no development plans. In October 2012, Governor Cuomo visited Kennedy Square <https://www.governor.ny.gov/news/governor-cuomo-kicks-statewide-regional-economic-development-council-progress-tour-central-new> to announce upscale residential, retail, and office space development for Upstate. In 2013, the project was torn down with plans to complete the proposed redevelopment by 2016. Nothing has been built on the site to date.

Segregation by class is also high and growing in New York State, which has the highest income inequality <http://fiscalpolicy.org/nys-leads-nation-in-income-inequality> of any state in the nation. The share of all income going to the top 1% <http://fiscalpolicy.org/wp-content/uploads/2017/03/Income-Polarization-Brief.pdf> in New York State has tripled since 1980 from 10% to 30% or more since 2005. The New York City metro ranks 1st in residential segregation by income in the nation. Over half <https://s4.ad.brown.edu/Projects/Diversity/Data/Report/report111111.pdf> of all families in the New York City metro live in predominantly low-income or upper-income neighborhoods. Upper-income families are more segregated from others than low-income families are. Income segregation among black and Latino families is now much higher <https://s4.ad.brown.edu/Projects/Diversity/Data/Report/report111111.pdf> than among white families, which means that low-income communities of color suffer more than ever from a double segregation by race and class.

David Smith – The former President of Upstate Medical University, who also acquired 400 units in two low-income housing projects in Presidential Plaza for Upstate students and doctors, was forced to resigned in 2013 for padding his over $600,000 state salary with $350,000 from outside medical companies without permission of the state.

Steven Aiello and Joseph Gerardi – Both are partners in COR Development. Aiello has been convicted of bribery conspiracy with Governor Cuomo’s closest aid, Joseph Percoco. The Aiello and Gerardi face more charges of bribery, bid rigging, wire fraud, and false statements to federal officers in the same trial as Kalyeros. COR partners and their family members were the largest local donors to Cuomo’s 2014 campaign, giving $287,500 <http://www.syracuse.com/news/index.ssf/2014/07/1_in_4_to_cuomo_from_onondaga_county_came_from_developer_for_syracuse_inner_harb.html> since 2011, a little more than one quarter of all that Cuomo raised in Central New York.

Joseph Percoco – Cuomo’s campaign manager and closest staff aide, Percoco was paid by Cor Development <http://www.syracuse.com/state/index.ssf/2018/03/cuomo_aide_percoco_cor_trial_ny_corruption_case_verdict_do_not_publish.html> via a shell company set up by Todd Howe to use his position to get several favors, including a raise for Steven Aiello’s son who was working in the Governor’s office and removing a project labor agreement from an Inner Harbor parking lot project. Percoco was convicted of two counts of conspiracy to commit honest-services fraud in a pair of pay-to-play scams that $300,000 from execs at two companies doing business with the state. Once company was COR.

The other company was Competitive Power Ventures, the builder of a controversial fracked-gas power plant in Orange County. CPV’s Peter Galbraith Kelly Jr. is pleading guilty <http://www.recordonline.com/news/20180426/former-cpv-executive-agrees-to-guilty-plea> today to bribing Joe Percoco to move the CPV plant forward. Peter Galbraith Kelly Jr. is a top Democrat <https://www.bloomberg.com/research/stocks/private/person.asp?personId=1097095&privcapId=51185527> who has served as a member of the Democratic National Committee, Treasurer of the National Democratic Institute for International Affairs, and National Treasurer and National Finance Chairman of the Democratic Party. He is also a Managing Director of Black, Kelly, Scruggs & Healey (BKSH), a subsidiary of Burson-Marsteller, a global public relations firm. BKSH is the successor to the lobbying firm of his father, Peter Galbraith Kelly Sr., himself a leading Democrat who was a partner with Paul Manafort, Roger Stone, and Lee Atwater in Black, Manafort, Stone and Kelly <https://en.wikipedia.org/wiki/Black,_Manafort,_Stone_and_Kelly> , which represented, among other clients, dictators Mobutu of Zaire and Ferdinand Marcos of The Philippines, Senators Jesse Helms and Phil Gramm, and Bethlehem Steel and the Tobacco Institute.