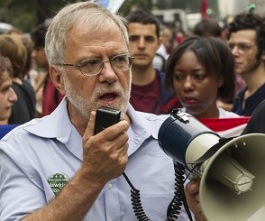 NY Should Join CA to require new buildings to include solar, renewable energy

Mark Dunlea, the Green candidate for State Comptroller, said that state should followed the lead of California, which recently required all new building by 2020 to include solar power in their design.

“Cuomo keeps on putting out news releases claiming he has increased solar in the state by 1000% even though only 1% of the state’s electricity is coming from solar. The VDER rule adopted by the PSC last year brought the community solar farm efforts to a standstill. The legislature needs to tell the Governor to stop doing the bidding of the corporate-owned utilities and instead speed up the transition to solar, wind, and geothermal in New York,” said Hawkins.

The VDER (Value of Distributed Energy Resources) Moratorium bill (A.10474/S.8273), which is on the Assembly energy committee calendar this week, amends the public service law to restore net energy metering for community solar. It places a three-year moratorium on PSC’s complicated and unworkable solar compensation policy. It requires the Public Service Commission and the Long Island Power Authority to create a methodology to compensate customers for the full and accurate value of their energy generation by 2021, including valuing equity and justice.

Earlier this month, California became the first state to require all new homes to have solar power. The extra cost to home buyers will be more than made up in lower energy bills, which has won over the construction industry.

“When it comes to renewable energy, New York has been long on rhetoric and short on deliverables. We only get 4% of our electricity from wind and solar. There is no reason not to require new buildings to not only to have net zero carbon emissions but to actually add clean energy to our power system,” noted Mark Dunlea, who has helped coordinate the campaign to move New York to 100% clean renewable energy by 2030