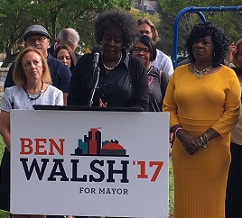 According to Hudson, her reason for supporting Walsh is the right thing to do. “It’s time for the people of Syracuse to take City Hall back. I’ve worked hand-in-hand with Ben on housing and development projects for several years. At each turn, we’ve rolled up our sleeves and driven positive change for our city” County Legislator Williams cited Walsh’s leadership and vision for her rationale for supporting his candidacy. “Ben is a thoughtful leader who works to see all communities benefit. He’s passionate about our city, has young children attend our schools and is running for the right reasons-for the city, not for his career”. Katie Sojewicz, Commissioner of Education also joined the event endorsing Walsh. 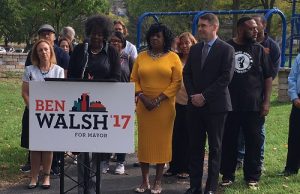 The event held in Lexington Park, was attended by neighborhood supporters and people interested in hearing what Ms. Hudson and Williams had to say about their reason for endorsing Ben Walsh. One person noted after the event that Ben Walsh helped him distribute food, “under the bridge” he helped hand out the lunches to the hungry who gather daily. Another spoke of Walsh attending a religious ceremony and staying to help clean up, no staff or cameras.

Walsh praised Hudson and Williams for their courage and strong commitment to the city of Syracuse. “ Both Councilor Hudson and Legislator Williams are widely-respected for their work in the city, are true pillars of our community, and vital to our city’s social fabric. I’m incredibly honored, and grateful for their support in the weeks ahead.

The endorsement is a major development for Walsh who is in a virtual dead heat in the race for Mayor against Democratic Party standard- bearer Juanita Perez Williams. The recently released poll has Williams with 35% and Walsh at 28% close to the margin of error. Reportedly, Walsh’s support among African American voters was at 2 percent, this endorsement couldn’t have come at a better time for the candidate who’ll need to increase his support to win in November. Monica Williams and Helen Hudson are Democratic Elected Officials and are highly respected within the African American Community.

Walsh was Deputy Commissioner of Economic Development for the Department of Neighborhood and Business Development for the city, and strengthened neighborhoods and businesses across Syracuse. A recipient of the 40-Under-40 Award, Wash currently serves as the President of the Board of Trustees at The Gifford Foundation, and sits on the board of a variety of foundations focused on growing Syracuse.