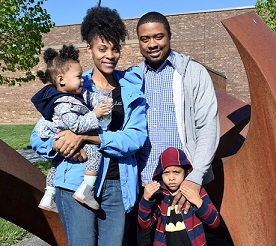 Yajha and Deyquan  met at Tucker Missionary Baptist Church on Oakwood Avenue and began dating in 2002.

They’ve been inseparable for 15 years. Now Yajha and Deyquan Bowens are about to earn their college degrees together. They met in church, became high school sweethearts, got married and had children. This Saturday’s commencement ceremony will mark another milestone in their lives. “I consider this associate degree to be like a master’s. This is what I set out to do and I’m finishing what I started,” said Dayquan. “I know some people think, ’it’s just an associate degree.’ I’m treating it like it’s top notch. It was a struggle for both of us,” said Yajha.

Religion brought Yajha and Deyquan together. They met at Tucker Missionary Baptist Church on Oakwood Avenue and began dating in 2002. They continued dating through high school despite attending different schools. Yajha graduated from Nottingham in 2006, Deyquan from Corcoran the same year. That fall both began taking classes at OCC.

When it was time to choose a major Deyquan struggled with conflicting advice from his parents. “My dad encouraged me to do what I wanted to do but my mom wanted me to, ‘do something that made money.’” Deyquan took his mother’s advice and chose Computer Engineering. “It wasn’t my passion and I couldn’t stay focused.” He flunked out, then tried what his father suggested. Deyquan had played music his entire life. He followed his heart into OCC’s Music major with a specialization in Piano. He loved it but by that time had lost financial aid and needed to take classes part-time. 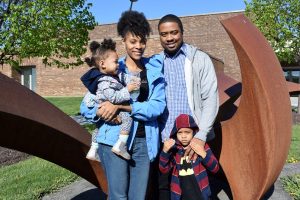 Yajha faced similar struggles. She too lost financial aid and had to become a part-time student while making ends meet. She would eventually earn an Early Childhood certificate in 2009, then decided to pursue a degree in Human Services. “The major would allow me to do what I like and work with children. With marriage and children and life I wound up being in school longer than expected.”

As they continued pursuing degrees Deyquan and Yajha married in 2012. One year later they started their family. Today Deyquan Jr. is 4 and Ahjay is 1. As Deyquan and Yajha have worked toward their degrees they have also established themselves in the community. Deyquan owns his own business, Kue Music and Entertainment and also teaches Gospel Choir at SUNY Cortland. Yajha is in her third year teaching a class titled “Building Women” to 6th, 7th and 8th graders at Lincoln Middle School. 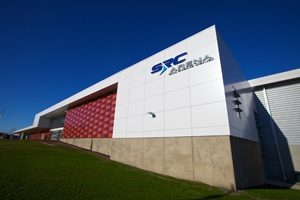 As the moment approaches when Deyquan and Yajha will walk across the stage at SRC Arena and receive their degrees they have an appreciation for what they’ve accomplished and the people they have become. “I’m much more mature now than when I started. I took financial aid and life for granted. Now I’m more focused than I’ve ever been. For us it was good to go to college as long as we did and later in life,” said Deyquan. “It’s important we finish to show our kids although you have stumbling blocks you can still be successful,” said Yajha. “You shouldn’t let anything stop you. Persevere!”