“With this budget, we are making the single largest investment in Upstate New York in a generation,” Governor Cuomo said. “From creating jobs and strengthening our infrastructure to investing in farms, hospitals and broadband access, this budget is paving the way toward a new economic vitality in Upstate. It’s all part of how we’re turning around the decades of neglect that the region used to experience from Albany, and we will continue building the region back better than ever.”

The budget calls for what Syracuse Mayor Stephanie A. Miner has been asking, additional monies to aid cities with their infrastructure needs. In addition to another round of Regional Economic Development Councils (REDC) programs, there are anti-poverty programs that will target the upstate areas specifically. Perhaps the item with the most immediate impact will be the New York State Fair. The budget appropriates 50 million dollars to transform the New York State Fair with the largest investment in 100 years.  CENTRO bus service will be spared threatened cuts. In a statement Miner said, “This is an important step forward in helping address aging infrastructure in cities.”

Ensure Statewide High-Speed Broadband Access by the End of 2018
Governor Cuomo set an ambitious goal to ensure every New Yorker has access to high-speed broadband service by the end of 2018. In order to accomplish this, the Budget includes $500 million to launch a statewide broadband program that leverages at least an additional $500 million in private resources to create the New NY Broadband Program. The program will incentivize private sector providers to expand high-speed broadband access in underserved and unserved communities. This is the largest and most ambitious state investment in universal broadband deployment in the country.

Support for Capital Projects for Health Care Systems
$400 million is reserved to support debt restructuring and other capital projects for health care systems in rural communities to facilitate health care transformation. Upstate health care systems are critical service providers and some of the largest regional employers. However, financial challenges exist for smaller, community-based and geographically isolated systems that could prevent their participation in critical state reform efforts.

· $40 million for the Port of Oswego to link with the Port of New York and create additional intermodal rail yards in Syracuse and Binghamton. Such improvements will reduce truck traffic on downstate highways, increase existing export activity, build small and medium sized enterprise export capacity in upstate, and expand efforts of regional service providers.
· $15 million for the Port of Albany for enhancements to ensure Upstate New York is ready to handle the projected increase in volume of containerized cargo resulting from the Panama Canal expansion of 2016. The State’s investments will support improvements to the Port’s southern dock to expand shipping capacity and serve grain operations.
· $10 million for the Port of Ogdensburg for improvements to the port’s facilities and equipment, including harbor deepening to accommodate larger ships and expanded grain and salt storage.
$50 Million to Transform State Fairgrounds 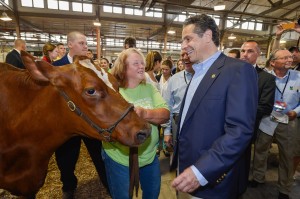 Gov. Cuomo meets those showing their animals at the NYS Fair

The Budget includes $50 million in Capital Projects moneys for the State Fairgrounds. It has been over one hundred years since the New York State Fair embarked on a transformative capital project. It was 1909 when the first of the major buildings were completed as a part of this development. This year we lay the groundwork for the next century of a new, dynamic State Fair, one that will support the economy of Central New York, showcase New York food and agriculture and revitalize Onondaga County in an unprecedented way. Through this $50 million investment the New York State Fairgrounds will be transformed into a premier multi‐use facility by enhancing the fairgrounds’ infrastructure and buildings as well as the surrounding community to create a world‐class entertainment and tourism destination, making this the greatest State Fair in the Country and providing enhanced economic activity for decades to come.

$50 million to Expand & Protect Agriculture in the Southern Tier & Hudson Valley
The Budget includes $50 million for the Governor’s proposed Southern Tier and Hudson Valley Farm Initiatives. These will support farms in the region by helping landowners maintain and protect farmland, as well as develop and grow farm, agricultural and related businesses.

Student Loan Relief
The Budget includes student loan support that is designed to help eligible New York State residents who graduate from college and continue to live in the state to pay nothing on their student loans for the first two years out of school. For graduates earning less than $50,000 per year, the Get on Your Feet program will supplement the federal Pay As You Earn (PAYE) income-based loan repayment program. The amount a participant will benefit is based on the amount owed and their adjusted gross income. The program is estimated to assist 7,100 graduates in its first year and more than 24,000 participants annually by 2019-20.

Increase investment in the Environmental Protection Fund
The enacted budget raises the Environmental Protection Fund to $177 million dollars, an increase of 32 percent since Governor Cuomo took office. The $15 million increase will support increases in fourteen categories, including land conservation, stewardship, and invasive species control and prevention. The increase includes a new sub-allocation for capacity grants to State Parks friends’ groups.

Support for Fort Drum
Fort Drum is one of New York’s treasures and an institutional anchor for its region. More than 50,000 North Country residents rely on this base for economic stability. To ensure Fort Drum remains a strong fixture in New York and a worthy home of the 10th Mountain Division, the Budget includes $1.5 million to purchase land for training and $25 million for improvements along Route 26.

Brownfields Reform and State Superfund
The Budget extends the Brownfields Cleanup Program for ten years, and includes important reforms to protect taxpayers and promote brownfield redevelopment, particularly Upstate. The Budget also includes a new $100 million appropriation and extends the State Superfund cleanup program for 10 years, which has been instrumental in identifying, investigating and cleaning up hazardous waste sites throughout the State.

Enhance Oil Spill Preparedness
In response to the increased volume of crude oil being transported through New York State, the Budget provides funding for additional staff dedicated to oil spill planning, training and response, consistent with Governor Cuomo’s Executive Order 125, which outlines steps the State is taking to improve oil spill response and prevention. The Budget also provides the necessary funding for planning and preparedness costs and ensures the solvency of the Oil Spill Fund by increasing fees for oil transported through New York.

Launch another $110 million round of NYSUNY2020 and NYCUNY2020
SUNY2020 and CUNY2020 are challenge grant programs designed to simultaneously strengthen academic programs at the State’s public colleges and universities while spurring economic growth at specific campuses and in nearby communities. The programs provide incentive for capital development on and around SUNY and CUNY campuses. The Budget includes $110 million to continue these programs.

Strengthen Roads & Bridges Statewide
The Budget includes $750 million for significant repairs and maintenance efforts on the state’s network of roads and bridges, ultimately enhancing the strength and resiliency of road infrastructure statewide.

Local Capital Aid for Extreme Winter Recovery
The Budget includes an additional $50 million of capital to help municipalities repair and rehabilitate local roads and bridges impacted by the extreme winter.

Upstate Transit Aid Increase
Upstate transit systems will receive an extra $25 million this year, $10 million in operating and $15 million in new capital spending. This funding will help address the rising cost of operations and alleviate increases in fares and cuts in services