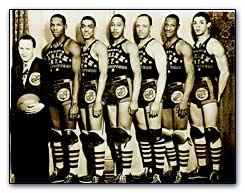 As CNY basketball fans reveled in SU’s huge – and possibly rivalry-renewing – win over Georgetown last week, a piece of hoop history quietly came to town. None other than the Harlem Globetrotters came to the War Memorial hardwood on Feb. 28 to suit up for an exhibition match against their traveling opponents, the New York Nationals.

Serious roundball fans might dismiss the Trotters as buffoons or tricksters. But make no mistake about it – putting their shenanigans and clowning aside, these guys show some serious athleticism.

The Globetrotters are a remnant of a bygone basketball era, when organized leagues were, at best, flimsy and fleeting associations. From their inception in 1926 until the late 1940s, they played mostly serious basketball, barnstorming across the country to take on, and usually beat, all comers. In 1940, they won the world pro basketball championship, defeating the mighty New York Renaissance or “Rens,” another all-black barnstorming squad, and then downing George Halas’ Chicago Bruins to take the title. In 1948 and ’49, they twice topped the world champion Minneapolis Lakers.

As the NBA became integrated, it began to attract most of the best talent, black and white. So the Globetrotters, whose winning ways began to scare off potential opponents, increasingly included showmanship in their roundball repertoire and turned largely to exhibition games. The Trotters have played in more than 100 countries before hundreds of millions of fans, including popes and presidents, kings and queens.

They started with their signature Magic Circle. To the tune of “Sweet Georgia Brown,” the Trotters showed off their incredible ball-handling skills, including the famous single-finger spin and the shoulder roll.

While the likes of the legendary “Meadowlark” Lemon, “Geese” Ausbie and “Curly” Neal are long gone, younger players have replaced them in the Trotter lineup. Keiron “Sweet Pea” Shine is the Trotters’ new Marques Haynes – he showed off his incredible dribbling skills, usually while kneeling or sliding across the floor.

Paul “Showtime” Gaffney lived up to his nickname, baiting the ref and the National players. His main target was player/coach Shawn Faust, whose long hair gave Gaffney cause to call him “Shaggy.”

In a 2004 article in the St. Cloud (Minn.) Times, Faust said that he doesn’t mind being a straight man, because he realizes that without the Nationals, the Trotters’ show would not be the same.

During the game, the Globies pulled their usual antics – the tight three-man weave, throwing buckets of water on the referee and confetti into the crowd, lining up in a football formation, behind-the-back and between-the-legs passing, and many high-flying and acrobatic slam dunks. For one dunk, Trotter Willie Shaw, who played college ball at St. John’s, jumped right over the referee.

Most importantly, they got the crowd, particularly the little kids, involved. They “stole” a woman’s purse, tossed a boy’s shoes onto the court, and helped a young girl spin the ball on her finger. Afterwards, they stuck around to sign hundreds of autographs.

This last point is telling. In an era where too many pro athletes turn out to be whining prima donnas or chest-thumping thugs, the Globetrotters are exactly the opposite. Yes, they are showmen. But they also run basketball clinics for kids and work to raise money for all sorts of charitable causes. Last Thanksgiving they traveled to Iraq to play for the troops.

Clowning aside, the Trotters have revived their competitive play in recent years, taking to the court to face, and usually defeat, top collegiate fives each fall. Local fans might remember that the Trotters came to the Dome in November 2003 to face the national champion Syracuse Orangemen. Led by former Syracuse star Lazarus Sims, the Trotters thumped the Orange by an 83-70 score.

But the trickery is what pays the bills and the Harlem Globetrotters represent tomfoolery at its ultimate best. And by the way, they won last week’s game, topping the Nationals by a 72-43 tally.