Syracuse, NY, November 17, 2015:  On November 23 at 2pm a vigil will be held in memory of the 17th year of the murder of Jason Crawford. Organized by Rashawn Sullivan, the young man responsible for taking his life.

After 17 years in prison Mr.Sullivan has made it his purpose in life to ensure that a teenage mistake that created a ripple effect within the Syracuse community is made right. Released from Prison this past April Rashawn has continued to speak his mind and sincere regret in the matter of his teenage actions. Today as an adult Rashawn uses the pain of his past to heal the community through honesty, sincerity and transparency. 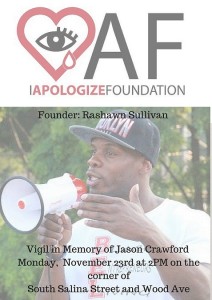