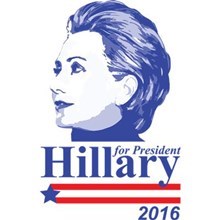 I’ve been asked by fervent Bernie Sanders supporters, “Why do you support Hillary Clinton?” and usually before I can respond, I am met with a barrage of charges and accusations towards the candidate.

Bernie Sanders hits all of the right keys when it comes to what I’d like this country to become. Sanders promise to senior citizens to increase amount of benefits to Social Security recipients, is bold. The charge that we can provide a free education is uplifting. Don’t forget the promise to take money out of our political system.

And of course the slam-dunk, breaking up the banks and reining in Wall Street.  All are noble causes that require our attention.  However, with a republican controlled House of Representatives and U.S. senate the aforementioned is impossible to achieve at this time.

Gerrymandering has guaranteed republican control of both houses until 2020, that’s the next U. S. Census when we divide congressional districts again. This process takes place every 10 years, state by state.

The U.S House switching to republicans has rendered the body ineffective. If anyone remembers how a bill becomes a law, the president doesn’t have the power to introduce legislation, congress does.

President Obama’s signature achievements were accomplished when he had a democratic house and senate. Those victories were years ago, and we see what has happened since, how many pieces of legislation have emerged from the U.S. House of Representatives?

The next president of the United States is going to have to use every tool in the U.S. Constitution rule book to prevent republicans from undoing the achievements of President, Barack Obama.

That person will have to evoke fear in those who threaten that legacy, which means they’d have to know the federal government inside and out. In addition, they’d have to know how to negotiate in tough international situations and come back with results.

If you notice the charges against Mrs. Clinton are not about her policies, as much as they are about campaign finance and nebulous conspiracy theories.

Being First lady, a twice elected Senator representing one of the largest states in the union and after a bruising campaign joined her rivals’ cabinet. She held the position as Secretary of State under the direction of President Obama.  She promoted healthcare before it was cool. As First Lady, Clinton was vilified by republicans for even bringing up the topic as a wife.

She’s handled accusations and hearings like the Rock of Gibraltar, a steady hand and head in the face of hostility.

That’s the kind of president of the United States republicans fear. Clinton’s not afraid to do battle and has the scares to prove it. But more importantly, her resume shows a record of accomplishment and steadfastness in the face of situations that would devastate the average person.

Bernie Sanders is promising things that he knows that are virtually impossible to achieve, he has no congressional backing for his plans.  How will his legislation be introduced? Who in congress will support it?

I admit I get the warm fuzzies listening to Bernie Sanders invoke Simon & Garfunkel’s hit, America for his New York Campaign.

Being a realist, I wish Clinton would hit back with a little vintage country with Lynn Anderson’s Rose Garden.

Come along and share the good times while we can

I beg your pardon
I never promised you a rose garden