Syracuse Mayor Ben Walsh delivered his fourth State of the City address tonight reporting that Syracuse is “standing strong” despite the health and financial crisis touched off by COVID-19.  From inside the Salt City Market, a soon-to-open food hall and public market in downtown Syracuse, Walsh reported on Syracuse’s continued progress, the challenges facing residents and how the City responded to community needs during the past year.

In accordance with the City’s Charter, the State of the City is delivered annually to the Syracuse Common Council. Members this year watched the address remotely due to COVID-19 restrictions.

“One year ago, right about this time, we gathered for the 2020 State of the City. There was a crowd of more than 400 people. We sat side by side in rows just a few feet apart,” Walsh said. “No one would have imagined a State of the City address presented without a live audience. I am pleased to report that your City is standing strong. We have faced the blows of the pandemic, and while the threat of COVID-19 is not over, we have withstood the challenge at every stage.”

Walsh highlighted the vision his Administration set at the start of his term: Syracuse will be a growing city that embraces diversity and creates opportunity for all. He detailed a list of indicators of the progress the City had made heading into the pandemic.

“Crime, vacant housing, and poverty are all down. Population, graduation rates, household income, and job growth are all up,” Walsh reported. “The financial rating agencies improved our outlook. And we were projecting a $1.5 million budget surplus.”

Walsh said the pandemic “dealt a blow to the pace of our progress, but our momentum is still there.” 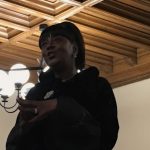 Walsh’s address noted the challenges still facing the City and its residents. While overall crime is down 7%, violent crime is up, as in most cities in America. He shared data on the success of the Syracuse Police Department’s new Gun Violence Suppression Detail, which recovered 19 illegal guns and made 35 gun-related arrests in the last quarter of the year. Walsh said vulnerable populations in the City are being badly hurt by the pandemic. He said the City is using CARES Act funding to increase street outreach to people in need and to address housing stability and homelessness.

Syracuse Common Council President Helen Hudson introduced Mayor Walsh. She said, as in working with any administration, “there has been some push and some pull.”

“With Mayor Walsh and his team, though, I’ve found there’s always been a commitment to working in ways that will serve everyone in the City of Syracuse,” Hudson said. “Mayor Walsh keeps the focus on collaborating for the betterment of the City.

In the address, Walsh announced that SU and the IVMF had accepted his request to launch and fund SyracuseServes, a program to help veterans in Syracuse navigate the network of public and private services available to them. Walsh said the community-based collaborative and care-coordination center will be housed at the new National Veterans Resource Center on the SU campus. It will be operated in collaboration with Onondaga County and local non-profit leaders and veteran-serving organizations. Part of its acclaimed AmericaServes program, IVMF runs the programs in cities like Dallas, Seattle, Raleigh, Pittsburgh, and New York City. 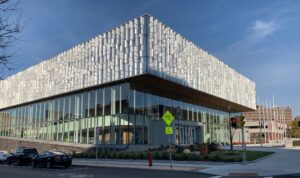 “Many veterans in our City are struggling greatly due to the pandemic and are frequently challenged by navigating the complex network of support systems available to them,” Walsh said. “With Syracuse University’s help, we’re going to do something about that.”

Walsh also unveiled plans to increase career pathways for youth and young people in Syracuse who are interested in police and firefighting. He announced the expansion of the Syracuse City School District’s Fire Rescue Pathways program under which students can select the Career and Technical Education (CTE) Fire Rescue program in the 8th grade. They will have the opportunity to get EMS and Drone training with Syracuse Fire Department professionals and attend college credit bearing classes at Onondaga Community College (OCC) as high school juniors and seniors.

He also introduced plans for a new Syracuse Police Junior Cadet program designed to connect recent high school graduates and other city residents with on-the-job training. The curriculum has been developed by SPD’s internal instructors in partnership with the school district. OCC, which now houses SPD’s academy, will also be involved, and CNY Works will provide financial and logistical support. Participants in the program will be eligible for steady, good-paying jobs, and graduates will be well-prepared to apply for a spot at the SPD police academy.

“These programs, developed with partners at the Syracuse City School District, Public Service Leadership Academy at Fowler, OCC and CNY Works, are examples of ‘opportunity for all’ and will make sure students are career and college ready,” Walsh said. “I believe they will change lives for young people in our City.”

Walsh made special note of the work by City of Syracuse employees to continue serving residents during the pandemic.

“The employees of your city government have persisted and prevailed. They have put themselves at risk of the virus; taken on extra duties; and accommodated new work practices,” Walsh said. “I want to thank our city workers and our union labor representatives who have consistently been rock-solid partners and regularly put the needs of the people they serve ahead of their own. You are the model of what public service should be.”