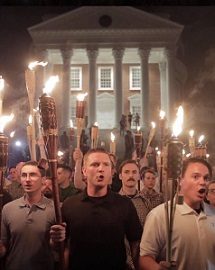 In the aftermath of the violent and deadly events in Charlottesville this past weekend, Governor Andrew M. Cuomo today signed legislation allowing prosecutors to increase penalties against those who make bomb threats against community centers.

This legislation was in direct response to the significant number of bomb threats called into Jewish Community Centers in New York and across the country.

“These despicable acts spread fear and terror across entire communities, and by signing this measure, we will give law enforcement more tools to prosecute hatemongers and treat these crimes with the seriousness they deserve,” Governor Cuomo said. “The horrific events in Charlottesville this weekend demonstrate that now, more than ever, we must stand united against bias and hate in all of its forms and this new law is one more step toward a more just and more equal New York for all.”

This legislation will make it clear that individuals that falsely make bomb threats to a community center can be charged with a public order offense which is, at a minimum, a class A misdemeanor punishable by up to a year in jail.

Previously, this charge pertained to offenses that took place on highways, transportation facilities, schools, places of amusement, parks, playgrounds, and hallways, lobbies and other portions of, apartment houses and hotels not constituting rooms or apartments designed for actual residence. This bill (A.7198A/S.5512) expands that list to include community centers.

Senator Patrick M. Gallivan said, “We should not tolerate acts of racism or hatred, or those cowards who make unfounded threats on community spaces. This legislation clarifies and extends the penalties for these appalling actions. Cracking down on threats to public spaces will create a greater sense of security and safety for our children and our families.  I am pleased that Governor Cuomo took swift action in signing this bill into law.”

Assemblywoman Amy Paulin said, “The recent wave of hate and vitriol that has swept this state and this nation is intolerable and in New York, we stand strong with our values of tolerance, kindness and empathy. This new law will ensure that any individual who seeks to instill fear into New Yorkers will be served justice – I commend Governor Cuomo for signing this legislation to protect everyone across New York State.”