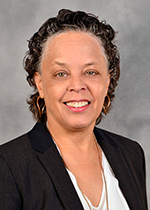 “This is a historic inauguration for Upstate,” said Inauguration Planning Committee Chair Dale Avers, DPT, PhD, professor of physical therapy and chair of the Faculty Council. “Not only are we able to celebrate the inauguration of our first female president, but we take this opportunity to showcase Upstate’s expertise and how it resonates in our backyard and echoes globally.”

The inauguration will feature an academic procession and greetings from representatives from the community as well as professional societies. As is tradition for the inauguration of a university president, representatives from academic institutions from across the state are expected to attend.  Syracuse Mayor Stephanie Miner and Onondaga County Executive Joanie Mahoney will extend greetings to Upstate’s new leader.

In addition, presidents from seven colleges and universities will attend the activities.  SUNY Trustee Chair Carl McCall and several members of the SUNY Board of Trustees also will attend.

Laraque-Arena will be formally installed as president by SUNY Chancellor Nancy Zimpher, PhD.

Featured remarks will also be made by Marie C. McCormick, MD, ScD, the Sumner Esther Felder Professor or Maternal and Child Health in the Department of Social and Behavioral Sciences at the Harvard Y.H. Chan School of Public Health and professor of pediatrics at Harvard Medical School.

The event will feature a dance performance by the Haudenosaunee Singers and Dancers of the Onondaga Nation.

Laraque-Arena began her service as president of Upstate Jan. 14. She previously was chair of the Department of Pediatrics at Maimonides Medical Center and vice president of Maimonides Infants and Children’s Hospital of Brooklyn.  As president, Laraque-Arena oversees one of New York’s public academic medical centers; a comprehensive health system, consisting or a 735-bed hospital on two campus and numerous outpatient sites, and the region’s largest employer.