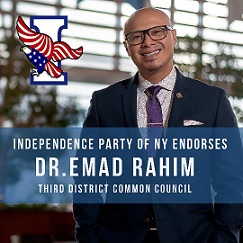 Syracuse, NY — Dr. Emad Rahim has been endorsed by the Independence Party of New York in the race for Syracuse third district Common Council.

“It is an honor to receive the endorsement, and I am excited that the Independence Party shares my vision for equity in education, safety, economic opportunity, and community engagement. I  gratefully accept their endorsement for third district Common Councilor,” Rahim said in a prepared statement.

Our campaign recognizes in the mission of the Independence Party, a common goal of an inclusive approach to governance. Emad, like the   Independence Party, believes in a charge that, “drives innovation and change by encouraging a new political prototype of leadership.” Their platform expands on this stating, “we in the Independence Party of New York believe government works best when leaders reach across party lines to get things done.”

The Independence Party  description of an ideal candidate is an individual who has led a very successful non-political career in the private and public sectors, Dr. Emad Rahim is that candidate. The endorsement earns him an Independence ballot line for the November general election after securing the Primary on Tuesday, June 25, 2019. We will continue working hard to earn every vote in our district.

The Independence Party is the largest third party organization in the country. The party seeks to foster balanced, pragmatic leadership and an end to partisan stagnation. It also prefers leaders that are not beholden to special interests or party leadership.

Dr. Emad Rahim currently works as the appointed Dean of Social Impact at Claremont Lincoln University, and Endowed Chair and Associate Professor at Bellevue University. He serves on the Board of Directors of CNY Community Foundation, SUNY OCC Scholarship Foundation and the Good Life Youth Foundation, and volunteers on multiple committees in the city. Dr. Rahim is a Fulbright Scholar and Leadership of Greater Syracuse (LGS) alum. He completed his post-doctoral studies at Harvard University and Tulane University, earned his doctorate and graduate degrees in business from Colorado Tech and completed his undergraduate education at SUNY Empire State College and Onondaga Community College.