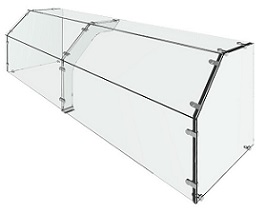 It’s become more apparent as we transition into this era of Republican Party Conservatism, that political discourse will never be the same. There was a time when a political candidate, incumbent and challenger, would gladly appear before groups of people, in the “public square” and debate issues. Those days have vanished, due to the installation of sneeze guards over our political discourse.

The Sneeze Guard, this health related barrier is used at salad bars and food service areas in restaurants. In politics, scripted appearances are sneeze guards of the 24th Congressional Race.

At these events, attendees will sit and listen attentively to heavily scripted presentations and responses from index cards, all gathered in advance of an appearance by the candidates.

There’s no opportunity for an actual debate in front of the people, giving us the ability to comparison shop.

This is not a criticism of the NAACP and their efforts. This is a commentary of the process that prevents the free flow of questions and information between the public and candidates, a tactic used by incumbents.

Democracy is cut-off at the knees, when voters can’t see their candidates together, discussing the issues, non-scripted, in a controlled environment, allowing for orderly discussion and debate of issues impacting the African American Community. Therefore, when these scripted appearances occur, they’re nothing more than an opportunity to view each candidate separately, utilizing a salad bar inspired, see-through barrier.

These appearances are designed like a political salad bar, so that people don’t “sneeze” on the produce, err, um candidate.

In this election cycle, locally and across the country, incumbent Republican Congressional candidates are displayed neatly for our visual inspection. Heaven forbid, any resident gets close enough in real-time to ask the incumbent Congressional Candidate an unscripted question, in front of a challenger. Discussion and debate in front of the people is what democracy looks like, not staged, and scripted events.