Washington, D.C. … Interstate 81 in Syracuse, NY is part of a new national report by the Congress for the New Urbanism (CNU) that urges the wholesale transformation of fifteen of America’s worst city highways to reknit communities disrupted by highway construction decades ago and generate new economic opportunities. The highways featured in this report for too long have served as a barrier between neighborhoods and polluted nearby communities, more often than not communities home to Black and brown Americans. Now, with these highways reaching the end of their designed lifespan, it is time to repair the damage and channel the benefits unlocked by taking them down to serve the members of the current community.

The 2021 edition of the biennial Freeways Without Futures report highlights the local campaign of dozens of community groups in Syracuse to remove Interstate 81 and replace it with the preferred Community Grid alternative, along with similar highway removal campaigns nationwide. With cities, citizens, and transportation officials all looking for alternatives to costly highway repair and expansion, these fifteen campaigns offer a roadmap to better equity, opportunity, health, and connectivity in every neighborhood, while reversing decades of decline and disinvestment. 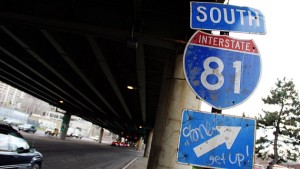 The report—the seventh in the series since 2008—comes at a time when more American communities are considering or undertaking highway removal. The Biden administration is pursuing a federal highway removal program as part of the American Jobs Act that, if passed, considers for the first time the social and economic ramifications of highway infrastructure and both acknowledges and repairs the damage that federal infrastructure projects have caused.

“The Congress for New Urbanism report documents how neighborhoods and people in Syracuse and other communities in the United States were damaged by the construction of urban interstate highways. It also acknowledges the hope and potential that is presented by the Community Grid to correct the ‘historical wrongs’ that were done,” said Mayor Walsh. “As the project goes forward, there can be no higher priority than protecting the interests of the people who live closest to the highway and correcting social and environmental injustices that occurred. I commend the CNU on its work.”

Across the US, 18 cities have committed to replacing or mitigating major freeways since the late 1980s, including cities like San Francisco, Milwaukee, and New York, which fully removed highways successfully with no adverse impact on traffic. The 15 highways in this report represent the next generation of these projects:

A jury of nationally recognized transportation experts chose this year’s list from 32 nominated in-city freeways. The panel reviewed each submission based on a number of criteria: the age and state of the highway, the quality of alternative boulevard or street design, the feasibility of removal, community support for removal, existing political momentum, redevelopment opportunities, potential cost savings, and potential to improve access to opportunity for underserved communities.

Freeways Without Futures portrays the increasing awareness that last century’s transportation infrastructure was built at the expense of communities of color and an increasing commitment to right these historical wrongs. Now, in more places from coast to coast, the question is no longer whether to replace, but when and how to remove, transform, and repair.

Copies of Freeways Without Futures can be downloaded from https://www.cnu.org/highways-boulevards/freeways-without-futures/2021.

Members of the Congress for the New Urbanism (CNU) help create vibrant and walkable cities, towns, and neighborhoods where people have diverse choices for how they live, work, shop, and get around. People want to live in well-designed places that are unique and authentic. CNU’s mission is to help people build those places. Visit www.cnu.org for more.