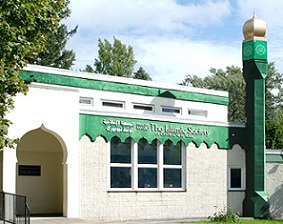 The Islamic Council of Greater Syracuse is deeply saddened by the act of terrorism that took the lives of 49 people at two mosques in Christchurch, New Zealand on Friday.  We greatly appreciate the words of condolence and the support that we have all received from our Central New York neighbors and others.  We shall hold a vigil tomorrow, insha’Allah (God willing), Saturday, March 16, at Masjid Isa Ibn Maryam (Mosque to Jesus, Son of Mary) at 3:00 PM, located at 501 Park Street, Syracuse, New York, 13203.  We invite all of our neighbors to attend.

We are concerned about the increase of violent activity worldwide. We mourn the lives lost to acts of violent extremism. The New Zealand shooting incident is undoubtedly an act of terrorism as it is rooted in political ideology.

Terrorism has no country and no faith. Bigotry of any kind, by or against Muslims or non-Muslims, is unacceptable. It is in clear contradiction to the Quran and Prophetic tradition. Islam calls for equality, social justice and respect for all human life.

We call on elected officials to condemn hate speech and fanning the flames of Islamophobia, putting even more people in harm’s way. Violence against Muslims is on the rise, in no small part due to the hateful rhetoric which inevitably increases after such events. Promoting bigotry is, in itself, an act of violence.

The point of these attacks is to devastate, and sow fear in the hearts of Muslims. We cannot let fear deter us from frequenting our houses of worship, nor should we lose trust in God’s mercy. We will take more precautions, but at the same time, rely on Him.