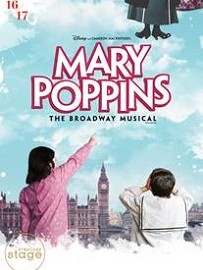 Based on the stories of P.L. Travers and the 1964 Disney film, Mary Poppins tells the story of the Banks family, well-to-do Londoners, and their eccentric, magical nanny. As George, the father, faces pressure at work, his children Jane and Michael torment every nanny sent their way, until Mary comes along. With her assistance, it’s not just the children who learn important lessons – the parents do, too.

The show is filled with famous songs including “Jolly Holiday”, “A Spoonful of Sugar”, “Supercalifragilisticexpialidocious”, “Chim Chim Cher-ee”, and many more.

Co-produced with the Syracuse University Department of Drama, this production stars Emily Brockway as the magical nanny, Jonathan Burke as chimneysweep Bert, and Benjamin Howes as Mr. Banks.

Peter Amster, who has helmed such popular Syracuse Stage productions as Ken Ludwig’s Baskerville: A Sherlock Holmes Mystery, Alfred Hitchcock’s The 39 Steps, and A Christmas Carol, returns to direct this high-energy musical. This production, while familiar to many audiences, might surprise those who have only seen the movie, says Amster.

“There are darker colors in our shadows as well as light in this production,” he explains. “Many people know the musical, know the movie – the story it has to tell about this family and how a strange, interesting, complicated, kind of scratchy character changes their life. This family is in the process of splitting apart and she comes in with her odd magic and pulls them back together again.”

If the conceit of a whimsically magical character visiting an upper crust English family sounds familiar, it’s for good reason – Travers was greatly inspired by J.M. Barrie’s Peter Pan. Unlike Peter’s tale, however, Mary and the Banks family deal with more grounded concerns, such as the financial and economic depression England was facing in the ‘30s. This gives the fanciful story a taste of grim reality, Amster said, and provides further tension.

“I think that extra layer of financial stakes, the desperation of Mr. Banks to make a go of it – the stakes became much more interesting,” he says.

Though not explicitly holiday themed, Amster explains Mary Poppins is a perfect choice for this time of year because of its focus on family and the recognition of the importance of keeping together as a family.

Audience members of all ages and theatre knowledge are sure to find joy in Syracuse Stage’s production. Amster promises some surprises even for those who may think they know the tale inside and out.

Tickets are available in-person at the Box Office, by phone, 315-443-3275, or online at www.syracusestage.org.

Dec. 4              New! Brunch & Broadway Steps
Dancers of all ages and abilities can join Mary Poppins choreographer Anthony Salatino for a dance class at Syracuse Stage to learn some choreography from the show. Class at 11 a.m., free for ticket holders.

Prologue at 1 p.m. (free for ticket holders)
An intimate, 20-minute pre-show discussion with the actors one hour prior to curtain. Bring your questions.

Dec. 8              Magical Sidewalk Happy Hour at 6 p.m. (free for ticket holders)
Come experience magic as local sidewalk chalk artist John Landers creates a work of art inside our lobby with the help of Studio 15 and free appetizers courtesy of Dominick’s Restaurant. All drinks will be half-priced.

Dec. 10            Prologue at 2 p.m. (free for ticket holders)
An intimate, 20-minute pre-show discussion with the actors one hour prior to curtain. Bring your questions.

Dec. 18            New! Brunch & Broadway Steps
Dancers of all ages and abilities can join Mary Poppins choreographer Anthony Salatino for a dance class at Syracuse Stage to learn some choreography from the show. Class at 11 a.m., free for ticket holders.

Jan. 8               Sensory-Friendly Performance at 3 p.m.
Welcoming to individuals with sensory, social and learning disabilities and their families, the performance will have special accommodations that create a more relaxed theatre experience without losing the magic of a live performance.