“Syracuse Stage is a global village square where renowned artists and audiences of all ages gather to celebrate our cultural richness, witness the many truths of our common humanity, and explore the transformative power of live theatre.”

Syracuse Stage again will bring us August Wilson’s The Piano Lesson and much more in the upcoming 2014/15 Season. Opening with Vanya & Sonia & Masha & Spike This raucous comedy smashes together Chekhov’s classic themes of loss and longing with really impressive abs, Disney’s Snow White, and a prophetic housekeeper. Sonia and Vanya have frittered their lives away in the family farmhouse. Enter their sister, self-absorbed movie star Masha, with her 20-something boy toy Spike, and the stage is set for a weekend of hilarity. Followed by Hairspray; November 28, 2014 – January 4, 2015; In the Next Room, or the vibrator play, January 28 – February 15, 2015; Sizwe Banzi is Dead,  February 25 – March 15, 2015. The season ends with Other Desert Cities, April 8 – April 26, 2015. The following are shows where Urban CNY is proud to be a media sponsor for the following productions:

PULITZER PRIZE-WINNING DRAMA. The past threatens to pull apart brother and sister. Bernice treasures a one-of-a-kind piano, an heirloom with carved figures of their enslaved ancestors. Boy Willie suddenly arrives from the South determined to sell the piano and buy the land his family worked on. When the ghost of the piano’s original owner appears, family conflicts escalate to a dramatic confrontation. With lyrical language rolling from the rowdy to the tender, this is one of Wilson’s finest.

“It seems to sing even when it is talking.”—The New York Times

ARE THERE SECRETS THAT SHOULD ALWAYS BE KEPT? Jon Robin Baitz writes fearlessly about the complex dynamics of wounded families. In this smart, sharply funny, and sensitive contemporary play, he folds art, politics, and family secrets into a tumultuous drama that pits a liberal middle-aged writer against her conservative parents. Who owns a family’s history? There are no easy answers in this 2012 Pulitzer Prize-nominated play where certainty shifts like sand dunes in the wind. 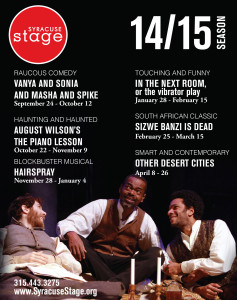