Like our democracy, the Southside Vote Mobile has run into trouble. The SVM is my cherished 1969 Buick Electra 225 convertible.  It’s a head-turner anytime, but these days it’s outfitted on  both sides with two eye-catching magnetic “VOTE” signs.

Make that one magnetic sign. The sign on the passenger side wouldn’t stick, and now it’s gone forever, perhaps jolted off by the buckled pavement and potholes that epitomize the Southside’s short end of the political stick.

Why would a magnetic sign not stick to 4,300 pounds of Detroit steel?
We’ll solve that mystery in a moment. Hint: Bondo has nothing to do with it.

But first I need to make clear why the Southside Vote Mobile was created — to remind/cajole/beg you to vote  on or before Nov. 3. No excuses. Please note: You can register through Friday, Oct. 9. If you haven’t registered yet, stop reading this column and register now. My timeless prose can wait.

Let’s get real here. This election is no longer just about social or economic justice, climate change, humane treatment of immigrants or any of the Big Issues that might otherwise drive you to the polls. It’s about excising a Zombie Apocalypse Death Cult from the White House and Congress. That’s not hyperbole. Trump and his inner circle have no regard for their own well-being. You think they give a damn about yours? Former First Lady Michelle Obama said it best the other day: “Vote for Joe Biden like your lives depend on it.”

I get it. We live in a Blue State.  Trump will lose New York no matter what, so maybe it’s tempting for you to blow off the Election. Don’t you dare.

The death cult has tentacles. They’ve ensnarled every branch, every level of government, including your Congressional seat in the form of a man masquerading as a moderate. Tyranny craves reasonable-sounding soldiers like Rep. John Katko. Racists thugs, whether White House aides who test positive for COVID-19 or assholes in pickup trucks brandishing Confederate flags, aren’t enough to keep it all going. To maintain a regime of White supremacy and mass death, the despot requires bipartisan worker bees who distribute grants to grateful constituents and, when it’s easy and convenient, take issue with the Cult Leader.  Yet they can always be relied upon to have his back when it matters most.

This illusion of democratic give-and-take has immense value to the tyrant. It legitimizes his reign.

The other day on his Facebook page, Katko crowed,  “I am proud to announce the passage of the Mental Health Services for Students Act, bipartisan legislation that would fund on-site mental health services for youth in Central New  York schools.”

See? Just another day of dedicated constituent service by a regular guy who gets things done in Washington. Other than his bedrock support for a racist, fear-mongering, science-rejecting, mask-removing, roid-raging President from the Abyss, Katko rocks. 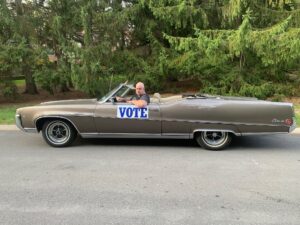 Jeff Kramer in his Buick Electra 225 mobilizing the vote.

OK, here’s why my VOTE sign wouldn’t stick. My auto body repair guy says cars of that age — when cars were cars and not plastic computers on wheels — were coated with epoxy primer, which can be resistant to magnets. Why the sign sticks on one side and not the other, I have no idea.

Now that we’ve cleared that up, sort of, I hope you’ll give me a shout-out if you see me cruising in the Southside Vote Mobile. One request: Can you make it a friendly shoutout? There has been one unpleasant incident with a Corcoran High School student walking home with a pal. I heard him loudly use a euphemism for large breasts. That prompted me to reflexively look his way. He said, “What are you looking at, pu&*y?” I told him not to call me that unless he desired to test the veracity of his epithet. I might not have used exactly those words.

“You wanna fight?” he challenged.

As he was a stout lad, I concluded that a physical altercation with a high school student was not in the interests of Jeffersonian democracy. So, I drove on. But I’m going to get in the last word here. Dude, whoever you are, do not mess with me. I still have four years of battery life in my pacemaker.  And one more thing:  If you’re 18, please, for God’s sake, vote.