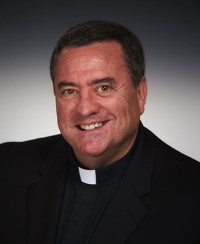 Jim Hannan to serve as interim provost starting on April 1

In an announcement made earlier this morning, Joseph G. Marina, S.J., provost and vice president for academic affairs at Le Moyne College, has been named the 28th president of The University of Scranton. Father Marina, who will leave Le Moyne at the end of March and take office as president in the summer, will succeed Scott R. Pilarz, S.J., whose second term as Scranton president ends at the close of the 2020-2021 academic year. His selection comes following a national search that began last August.

To ensure continuity in Academic Affairs and Student Development, President Linda LeMura is appointing Jim Hannan, Ph.D., as interim provost and vice president for academic affairs, effective April 1. Jim is currently serving as interim dean of the College of Arts and Sciences and previously served as dean of Assessment and Planning and chair of the Department of English. After earning a Ph.D. in English Literature from the University of Chicago, Jim joined the faculty in Le Moyne’s Department of English in 2006.

President LeMura makes this appointment with the support of faculty senate leadership, the College’s senior leadership team, and the leadership of the Board of Trustees. “Jim has demonstrated his leadership ability in a number of positions in recent years and he has been a key player in maintaining instructional continuity during the pandemic,” said President LeMura. “I am fully confident that he will serve successfully in his new role and provide stability as the College continues to address challenges and embrace opportunities in a rapidly changing environment. I am grateful that Jim will be able to work closely with Provost Marina during his remaining weeks to create a smooth transition.” President LeMura intends to conduct a search for a permanent appointment during the 2022-23 academic year.

As these changes are underway, President LeMura and Dean Hannan are working to ensure continuity in the Arts and Science’s dean’s office. They will provide an update as more information becomes available.

“I am honored to be chosen as the University of Scranton’s next president, but it is also a bittersweet time as I will be leaving Le Moyne, a place that has meant so much to me on both a professional and personal level,” said Father Marina. “I will certainly miss all my friends and colleagues here on the Heights but have no doubt that you will be in my daily prayers. I would be grateful for yours as well. Many thanks for the countless good memories of our collective work for Le Moyne’s great mission. And special thanks to Dr. LeMura for the opportunity to serve this great College as provost over the past five years.”

“I commend The University of Scranton for selecting Father Marina as its next president,” said President LeMura. “Joe has been a vital part of Le Moyne’s success over the past five years. Among his accomplishments as provost are the continued growth of graduate programs, including the launch of our first doctoral program in Educational Leadership, his work on our strategic plan Sempre Avanti, and the establishment of the Quantitative Reasoning Center and the Writing Center. On a personal level, he has been a confidant, friend and wonderful colleague. I wish him nothing but the best in his new role.”

“In addition to his accomplishments as provost, Father Marina has been a great sacramental presence to the entire Le Moyne College community,” said Robert Reklaitis ‘75, chair of Le Moyne College’s Board of Trustees. “We are proud of and celebrate Joe’s selection, which once again confirms the College’s historic role in cultivating and exporting great talent that other institutions want and need. It is an honor to know that, in terms of mission and the entrepreneurial spirit, Le Moyne College develops leaders for the greater good of the Jesuit education network.”

“Father Marina has a special dedication to Catholic and Jesuit higher education, and a pastoral approach to leadership that is grounded in his faith, in Ignatian spirituality and in a call for justice. He will further Scranton’s commitment to provide a transformative education, rooted in the liberal arts, and will guide our students to become ‘men and women for and with others,’” said Father Pilarz.