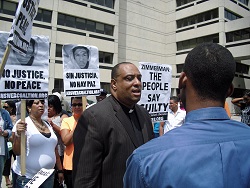 The crowd began gathering as a trickle that turned into a stampede by the noon hour, as cars and people converged on the Federal Building plaza. It was time for the Syracuse version of the Justice for Trayvon 100 City Vigil.

Rev. Agee of Hopps Memorial CME Church spoke with the press articulating what many in the community were feeling, “You should have no right to pursue somebody without reasonable cause that the persons involved in criminal activity. The people have come together here this afternoon to fight for justice for all black and brown people in this country to ensure that travesties such as what happened not only in the case in the case of Trayvon Martin… the people are gathered here today to ensure this travesty isn’t repeated.”

Agee continues, “Repeal of stand your ground laws that allow people to take the law into their own hands and claim self-defense.” Agee continues with a more positive message about the cultural divide, “We must encourage people to have relationships between races. When you don’t see people of color and the only images of people of color you see are on the news or a sitcom then naturally you’re going to live in fear. ”

By the time speeches began the crown had grown to over 200 people comprised of a rainbow of citizenry and causes. Propelled by events from Sanford, Florida to proliferation of Stand Your Ground Laws in 19 states the event was attended by laundry list of participants focused on the death of Trayvon Martin and the verdict in the George Zimmerman case.

Organized by the Al Sharpton lead National Action Network the Justice for Trayvon 100 City Vigil, are now focusing on citizen inspired action to change Stand Your Ground Laws that are in place in 19 states. Voting rights, electoral erosion caused by the Supreme Court and local police citizen relationships was on the minds of many in the crowd as they cheered each speaker when they hit a note of accord with the crowd.

A particularly emotional moment occurred when Mother’s Against Gun Violence leader and Syracuse Common Councilor Helen Hudson invited all those in attendance who’d lost a child to gun violence to come forward, she was joined by 6 women that represented a fraction of those victims of black-on-black crime. For those who’ve stated that the black community was silent on this issue the Syracuse protest paid special attention to the problem that exists within the African-American community. These are the images conservative news outlets like Fox News doesn’t show.

Not only were issues like the George Zimmerman verdict discussed, but local issues such as jail conditions were on the table. This was an orderly presentation of grievances along with participation of black and white, youth and older people, families, children, retired hippies, concerned citizens representing themselves and LBTG community. Capturing the frustration and anger were signs supplied by Socialists declaring, “The System is racist”.

A Syracusan visiting from Florida held his home made sign, “I am Trayvon”, Les Rivikin in Syracuse for a visit ,”This is for my grandkids, I participated in the marches in West Palm Beach, Florida where I now live.” He emphasized his pride in his grandchildren because they were of different races. This could be a turning point in our national discussion on Race.

Later this month, August 24th is the 50th Anniversary of Dr. Kings now famous I have a Dream Speech. Bus trips from across the country are being planned as I type. The last time there was this much chatter within the black community was when a man from Chicago had a notion that he could gather one Million Men in a massive gathering in Washington D.C.

The Need For Vetting

In my studies of Civil Rights history I was amazed at how they were able to endure so much by those who hated them to displaying Christian love at the protest march. They weren’t shouting about white people. King used the words of the constitution to turn a mirror on America…”Somewhere I read about the freedom of speech and freedom of assembly”

Every speech during that time was vetted so that they were all on the same page. No one could destroy their message if it were clear. Behind the scenes there were battles over what would be included or not in a major protest event or speech.

Oh no, it’s the “those of you who moved, you’re part of the problem”- syndrome. The speaker went on to chastise blacks who’d moved to the suburbs. The tone was angry; suddenly the peaceful tone was shattered with what tends to divide us- Race, no one wants to be chastised for where they’ve chosen to live.

The most notable civil rights marches and protests in history had one thing in common they were not focused on anger or even race it was conditions that John Lewis, Jessie Jackson and others protested. All speeches were vetted (reviewed by organizers to insure continuity of message) this made sure a march or protest didn’t turn into a mess. One speaker apparently hadn’t read much King, if so they would have known as Dr. Martin Luther King, Jr. once stated, No one wins in a dog fight”.