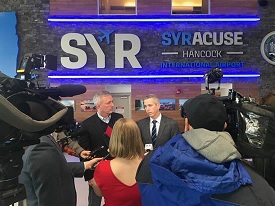 Katko, Brindisi Say Members of Both Parties Must Find a Bipartisan Compromise to Reopening the Government

Continued Shutdown Could Cause More Flight Delays, Put Our National Security at Risk

Syracuse, New York — Congressmen John Katko (R, NY-24) and Anthony Brindisi (D, NY-22) joined together to call on members of both parties to find a bipartisan solution to end the government shutdown. At the Syracuse Hancock International Airport (SYR) this morning, they also announced bipartisan legislation they will introduce to pay Transportation Security Officers during the shutdown.

Congressman Katko said, “The TSA officers who work right here in Syracuse – and nationwide – are working without pay because of the current government shutdown. Throughout my four years in Congress, I’ve worked to provide oversight of this agency and to make it more efficient and safe. I know that many of these hardworking men and women work paycheck to paycheck, which is why I’m proud to introduce bipartisan legislation with Rep. Brindisi and a bipartisan group of lawmakers today to allow TSA to provide pay to these officers during the shutdown.”

“The current shutdown has gone on for far too long. We need both sides to come together, listen to one another, and compromise. Rep. Brindisi and I are willing to do that, despite our party differences, because we both believe we must re-open the government. I am hopeful that as we head back to Washington today, more legislators are willing to work across the aisle.” 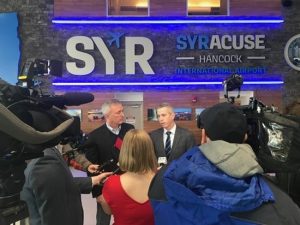 “This government shutdown has real consequences, especially for the people who work every day at our airports to keep our country safe,” said Congressman Brindisi. “The shutdown is causing unwarranted stress to the hardworking men and women who already work incredibly stressful jobs. They should be able to do their jobs without worrying that they might miss a car payment or fall behind on their mortgage.”

“Congressman Katko and I are part of a group of bipartisan members committed to working together to end this shutdown, and it’s time for leadership in both parties to follow suit. Let’s reopen the government now,” continued Brindisi.

Air traffic controllers are also working without pay. According to the National Air Traffic Control Association (NATCA), the Federal Aviation Administration (FAA) has suspended hiring and closed its training academy in Oklahoma City. The number of fully certified controllers is now at a 30 year low. If the staffing shortage continues, there will be reduced capacity in the National Airspace System, leading to more flight delays.