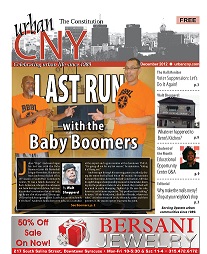 Julius “Pops” Anderson began his last run with the Baby Boomers {over 40} Basketball League November 25 as the ten team conference kicked off its 16th season at SouthWest Community Center. “It was a family decision,” reflects Anderson, who gets the nickname not from having ten children, but from his mother’s contention that at an early age he ate a lot of popsicles. “At my age {51}you think about getting hurt. I can’t take care of my family if I’m hurt.” Anderson holds down two jobs, as a custodian at the airport and a gym monitor at the downtown YMCA, “I’m going all out for my last season,” he maintains, “letting it all hang out.”

Anderson got through his opening game unscathed, playing the entire first half and bits of the second. He maintains his team Showtime, formerly Ballard Construction, will take its eighth league championship because his teammates know to play the positions it takes to win. Indeed, they worked well as a unit in easily thumping Tighten Up. He sees his role, however, as a bit more expansive. “My position is everything,” he notes. “A little bit of point, a little bit of boards, whatever it takes.” A tireless stream of steals, rebounds, assists and three pointers in the season opener illustrated his point.

Not getting the calls

But Anderson holds the typically wistful elder perspective on changing times for the BBBL, recalling the league’s early, “good old days, what we’re trying to get back to.” Part of it is personal. “It’s a lot of pressure because I don’t really get calls the way I used to,” he says. “People tell the refs before the game, ‘You can’t be giving him all those calls, he’s acting.'” And at one point, after contact with a Tighten Up defender, Anderson sprang back in a fall loudly characterized by an animated crowd as “flopping,” urging the referees to call a technical foul.

Showtime’s blow out was even more remarkable checking out who wasn’t present for the opening day line-up. The team’s roster includes Nottingham High School sensation Pony Bullock, LeMoyne standout Bobby Chestnut, and SU and NBA alum Howard Triche, whose dominance of the league in past year’s has led fans to refer to the team as “Howard ‘n them.” Triche remembers playing with Anderson at Corcoran High School, when Pops was named All-City and the team took the state championship. Both were recruited by Texas A&M he recalls. He chose SU, he says, because of academics and their offer. Of his passing up college, Anderson says he just didn’t have his priorities in order at the time.

Also absent was former SU player and coach, current coach at SUNY Binghamton, Lazarus Sims, who, according to league co-founder Ed Mitchell, is on the roster of B&B Lounge. Mitchell, who logged his court time at Henninger High School, operates the electronic scoreboard and runs a sharp tongue courtside commentary as the day’s events unfold, providing a lighter side to the intensity of the competition on the floor. Mitchell coached B&B to two league championships, and won one with Bricktown. Back in the day, he coached Pioneer Homes to a championship in the junior division of the prestigious Donny Fielder Tournament.

Mitchell and co-founder James “Puddin” Jackson agree that the 18 weeks of Sundays, with three weeks of post season playoffs, have created a series of social events, where everybody knows everybody, and looks forward to gathering after the games for food and frolic. The traditional sumptuous off court soul food spread was absent for the first round of games, but the founders promised it would be on tap the following week. Another tradition was loudly announced as Joe Parks spun sounds which fostered some head bobbing and finger popping, although Mitchell kept asking people to remind the DJ that it was 2012.

Jackson recalls the league’s founding. Playing in an over 40 county rec league, he wanted to bring that experience to the local community of color, providing a positive outlet for the energy of older players who still had game and needed a place to show it. He and Mitchell enlisted John “Wags” Wagner-who, at 66, is still playing in the league, and on opening Sunday showed he can still run-and approached SouthWest’s Executive Director Jesse Dowdell for use of the facility’s gym, which was no problem as the former college cager at Harden Simmons signed onto a roster on the spot.

Among the new faces at last month’s season opener was Jackson’s son Derek, who played two years at Boston College and two at Florida Atlantic, now a teammate with “Wags” on a Flav Unit team which could pose a serious challenge to Showtime for the league’s top spot. But for now, Anderson is taking it one game at a time. He is, however, putting some thought to what comes after the season is over. “My goal is to start coaching,” he says, “trying to help the youth learn from the mistakes I made, trying to keep it going in the community, trying to give back and help stop some of this violence.”