Le Moyne College, the City of Syracuse and the Town of DeWitt are asking for public feedback to expand and develop the Salt Springs neighborhood and surrounding area as part of a new strategic plan. That plan is called the Le Moyne Area Neighborhood Development Strategy (LANDS) draft plan and it is set to guide the development of transformational projects on and around Le Moyne’s campus in the months and years ahead. 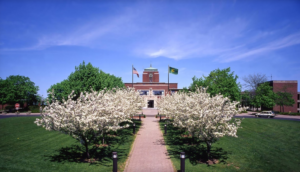 “As a Jesuit institution, Le Moyne College prides itself on being a strong community partner committed to working together with the City of Syracuse and Town of DeWitt to improve and enrich the vibrant neighborhoods that surround our campus,” said Le Moyne President Linda LeMura. “The LANDS plan will help provide a framework for a coordinated approach to determining future partnership initiatives. I’m grateful to those neighborhood residents who provided input for the survey and for the hard work of so many to draft this plan.”

The draft plan was developed from the results of a comprehensive community survey sent to residents in the neighborhood at the intersection of the City of Syracuse and DeWitt. It covered topics related to transportation, housing, infrastructure, municipal services, economic development and overall quality of life in the area. The defined neighborhood is home to approximately 3,800 residents bounded by Erie Boulevard East on the north and east sides, East Genesee Street on the south side, and Salt Springs Road and Seeley Road on the west side. 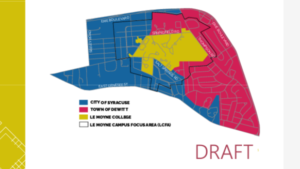 “The Salt Springs neighborhood encompassing Le Moyne College and bordering the Town of DeWitt is an important gateway for the city, commuters, and students. This kind of coordinated planning not only improves a loved eastside neighborhood for all residents across two districts, but also addresses how the Le Moyne campus can connect with the surrounding neighborhood in a way that opens up new and exciting possibilities,” said Syracuse Mayor Ben Walsh.

According to DeWitt Supervisor Ed Michalenko, “The LANDS project exemplifies “building community” in DeWitt; direct “connection” to the people and stakeholders in the neighborhood, on-going collaboration to develop a tangible plan, and then working cooperatively to bring those plans to fruition. LANDS is bringing people and projects together in a positive and productive partnership that serves not only the Le Moyne area neighborhood, but the whole of our community.”

The funding for the initial LANDS survey was provided by Empire State Development, Le Moyne College, the City of Syracuse and the Town of DeWitt. The LANDS plan will include recommendations to improve physical infrastructure, enhance services, and inform strategic initiatives such as expanding Le Moyne’s 2015 Master Plan for on-campus growth.

According to the study, survey respondents communicated that while they utilize the neighborhood street network for transportation and recreation, they feel that there are not enough pedestrian amenities in their neighborhood. Residents would like to see improvements in the quality and quantity of sidewalks, bike lanes, lighting, crosswalks, and additional amenities including benches and streetscaping, as well as traffic calming measures put in place to improve pedestrian safety.

“Still, there are numerous facilities and assets within the study area that participants love and are proud of,” said Owen Kerney, assistant director of the City Planning Division of the Syracuse–Onondaga County Planning Agency. Participants cited that they love being near the college campus for its musical bells during the holidays, annual fireworks show in August, and raspberry bushes available for picking in the summer.

The next step toward finalizing the draft plan is garnering public response which can be submitted to the City of Syracuse Division of Planning via the project page at http://beta.syrgov.net/projects/LANDS2021. Residents can also contact the City Planning Division by emailing planning@syrgov.net. The comments will guide the project team as they prepare a final LANDS Plan by the end of this year. Comments will be accepted through Friday, Dec. 3, 2021. Email to the following: planning@syrgov.net

Survey Findings
The LANDS Plan and strategy were drawn from a survey that was completed by nearly 300 neighborhood residents and stakeholders earlier this year. The survey solicited feedback on a variety of issues, including housing in the neighborhood, community health, and community infrastructure.

Other important trends identified in the survey include:

“The project team was excited to see the results of the survey, which reinforced neighbors’ satisfaction and commitment to living in the neighborhood,” said Kerney. “Those living in this area are also committed to improving it, so the LANDS plan identifies community supported strategies that the will improve community health and quality of life in the project area.”

Based on the findings, a few preliminary strategies have been identified, they include: