Syracuse, N.Y. – Le Moyne College has named Bob Beretta as its new Director of Athletics, just the fourth in the College’s 75-year history. A highly-respected executive and administrator within the intercollegiate athletics industry, Beretta will start at Le Moyne on May 1, 2021. He comes to Le Moyne following a distinguished career at the United States Military Academy at West Point.

Beretta was born and raised in Newburgh, New York, and was a Student-Athlete at St. Bonaventure University in Olean, New York, earning a bachelor’s degree in Mass Communication, and graduating with honors. He was a 4-time letter winner and 3-time team captain of the baseball team. Beretta wrote for the school newspaper and worked as a Student Assistant on the St. Bonaventure Sports Information staff. Upon graduation, he began an internship at the United States Military Academy’s Sports Information unit. He has been employed at the Academy for the past 34 years.

His most recent position is Senior Associate AD for Strategic Initiatives. Beretta began his career in sports information and was selected to the College Sports Information Directors Hall of Fame in 2020. He has been involved in all facets of Departmental planning and processes, Cadet-Athlete life, Sport Program Administration, and all facets of External Operations, including Athletics Development and revenue generation initiatives.

Beretta is married to Jennifer (Johnson) Beretta, also a graduate of St. Bonaventure. They have one daughter, Julia, who is a senior at Sacred Heart University in Fairfield, CT. Julia plays club Softball and is a member of the Cross Country and Track & Field programs. The last member of the Beretta family is their dachshund, named Sully. 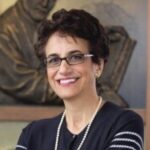 “Le Moyne is thrilled to welcome Bob to the Dolphin family in this important position,” said President Linda LeMura. “His extensive experience at Army, where he worked in a number of roles within the institution’s athletic department, have prepared him well to serve as Le Moyne’s Athletic Director. Bob has a deep appreciation and understanding of Jesuit education and the role that the scholar-athlete experience provides in cultivating a life of meaning and leadership.”

“I would also like to express my deep appreciation to Tim Fenton for his exceptional and dedicated work as Interim Athletic Director over the past 18 months,” LeMura continued. “Tim’s strong commitment to the success and well-being of our student-athletes represents the epitome of the College’s mission of cura personalis, the Jesuit tenet of ‘care for the whole person’.”

Beretta comes with a solid background in college athletics and is well respected. According to Lieutenant General Darryl A. Williams — U.S. Military Academy, Superintendent, “Bob Beretta has been in the Athletic Department for 34 years upholding the ideals and principles of West Point. He will excel as the Le Moyne Athletic Director.”

Lonn Trost, Esquire — New York Yankees, Chief Operating Officer said, “Bob Beretta was instrumental to our efforts of bringing college football into the landscape of events at the current Yankee Stadium, and his guidance and expertise was a driving factor in the overwhelming success of our inaugural game in 2010, which featured a still-standing record crowd for our facility. In subsequent years Army played at Yankee Stadium two additional times, which demonstrates the immense respect we have for Bob’s ability to foster tremendous experiences for players, staff, alumni and fans while navigating logistical challenges at the highest level. We salute Bob on his new position and offer our congratulations to Le Moyne College as they welcome such a talented administrator into its ranks.”

“For 30 years at the U.S. Military Academy, I have had the honor to work side-by-side with the officers, cadets, coaches, and cadet-athletes at one of the top leadership institutions in the world,” said Beretta. “With this in mind, I am thrilled and feel well-prepared to have the opportunity to serve as the next Director of Athletics at Le Moyne College.

“Thank you to President LeMura, all members of the President’s Council and Board Chair Bob Reklaitis for their clear vision, strong sense of purpose, and deep passion for the institution,” Beretta added. “These are fantastic people and I couldn’t be more excited to join their team. Thanks to Search Committee Chair Tim Lee, and the entire Search Committee.