RoAnn Destito, Office of General Services Commissioner, today announced that New York State’s celebration of the life and legacy of Dr. Martin Luther King, Jr. will be held on January 21, 2019 at 9 a.m. in the Empire State Plaza Convention Center. The public is invited to attend the free program in observation of Dr. King’s birth or watch it streamed live at empirestateplaza.ny.gov/nyking. The Be a King Volunteer Fair will begin at 9 a.m. at the base of The Egg; a musical prelude will start in the Convention Center at 9 a.m.; and the program will begin promptly at 10 a.m.

“Each year we celebrate the life and legacy of our nation’s most important civil rights leader by enjoying talented performers and inspirational speakers who pay tribute to Dr. King, at the NYS MLK Memorial Observance. This year we are especially excited to have Rashad Jones giving the keynote address and Lillias White singing,” Commissioner Destito said. “I join Governor Cuomo in inviting everyone to come in person or watch the live video of this important tradition at the Empire State Plaza where we rededicate ourselves to keeping Dr. King’s dream alive.” 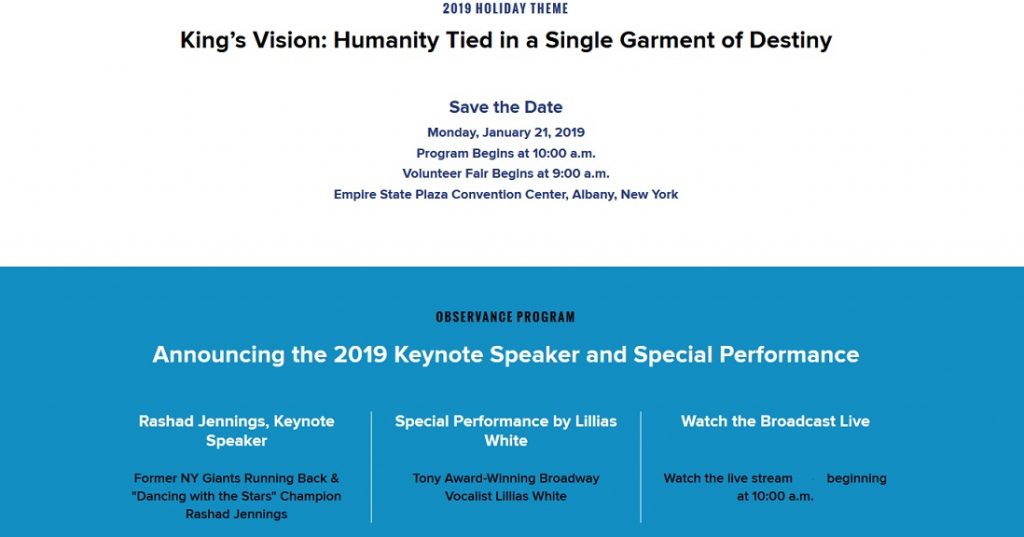 This year’s keynote speaker is Rashad Andre Jennings, a former National Football League running back. He was drafted by the Jacksonville Jaguars in the seventh round of the 2009 NFL Draft. He also played for the Oakland Raiders and the New York Giants. Jennings played college football at the University of Pittsburgh but made the difficult choice to transfer to Liberty University to be by the side of his ailing father.

Upon becoming a free agent in the NFL, Jennings took his athleticism to the stage of ABC’s hit show “Dancing With The Stars.” Applying the same unwavering dedication to outworking all of his peers, Rashad took the dancing world by storm and was crowned Dancing With The Stars Season 24 Mirror Ball Champion. He has also made guest appearances on TV shows such as Starz network’s “Power” and NBC’s “Great News.”

Along with being a philanthropist as founder of his national Rashad Jennings Foundation, Rashad continues to pursue dancing, acting, and a host of other entrepreneurial endeavors. He is also a noted speaker and has given motivational addresses to thousands across the country. At the young age of 33, he reached another great milestone in his storied career, becoming a published author with the release of his first book, “The IF in Life,” in which he wrote about the decisions that shaped his destiny.

This year’s celebration will include a special performance by Tony Award-winning Broadway actress and vocalist Lillias White.

Her other theater credits include Broadway productions of “How to Succeed in Business,” “Once on This Island,” “Rock n’ Roll: The First 5,000 Years,” “Barnum,” “Carrie,” and “Dreamgirls,” as well as the off-Broadway productions of “Crowns,” “The Vagina Monologues,” “Waiting for Godot,” “The Princess & The Black-Eyed Pea,” and “Dinah Was.”

White has also gone on national and international tours for “Ain’t Misbehavin’,” “Tintypes,” and “The Wiz.” Her TV and film credits include featured roles in the films: “Pieces of April,” “The Grinch That Stole Christmas,” “Gloria,” “North,” and Disney’s “Hercules.” In 1992 she won an Emmy Award for her role as Lillian Edwards in “Sesame Street.”

The Dr. King Memorial Observance will also include a number of musical tributes to Dr. King from local and regional performers, including the soulful sounds of Victory Boyd, SUNY Potsdam Crane School of Music’s Jazz Ensemble and the Dr. King Community Choir and Ensemble directed by Marcelle Johnson.

Following the formal program, the City of Albany “Beloved Community March” will begin at the Plaza Concourse entrance on Madison Avenue. The march will conclude at the King Monument in Lincoln Park with a wreath-laying ceremony. A CDTA bus will be available for those requiring transportation to the monument.

There will also be several additional activities taking place at the Empire State Plaza, including:

The Dr. Martin Luther King, Jr. Memorial Observance will be streamed live, beginning at 10 a.m. on January 21 at empirestateplaza.ny.gov/nyking.