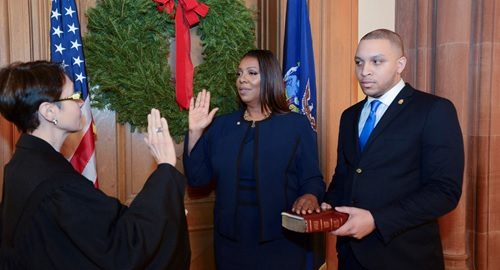 Takes Oath of Office at State Capitol in Albany

Albany, New York — Just before midnight, Letitia James was officially sworn in as the 67th Attorney General for the State of New York. In a ceremony held at the State Capitol in Albany, Attorney General James took the oath of office and committed to protecting the values and interests of all New Yorkers.

“It is the highest honor to officially begin my time as the Attorney General for the great state of New York. Tonight, I made a commitment to use the rule of law to protect the rights and advance the interests of all New Yorkers, and I will never waver in upholding that promise. New Yorkers in every corner of our state must know that they have a champion fighting for them everyday,” said New York State Attorney General Letitia James.

Following the official swearing in at the Capitol in Albany, Attorney General James will participate in the inauguration ceremony on Ellis Island on January 1st. She will also host several informal meet and greets throughout the State to connect with New Yorkers and introduce them to the office and her priorities.