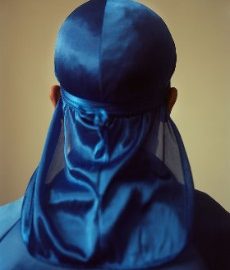 (Syracuse, NY, November 29, 2017) – Light Work is hosting an opening reception for ‘Anonymous’, an exhibition by New York City-based photographer John Edmonds and ‘New Voices: Recent Acquisitions from the Light Work Collection’ on Thursday, November 30, 2017 from 5:00 p.m. – 7:00 p.m.  Reception guests are invited to join artist John Edmonds at 6:00 p.m. for an in-gallery talk about his photographic portrait series, creative process and the intersection of art, politics, and black identity. Edmonds will also be signing of copies his ‘Anonymous’ exhibition catalog Contact Sheet 194.

Selected from over 4,000 photographs, ‘New Voices’ represent a conceptually and technically diverse collection of images by former Light Work artists-in-residence. The exhibition highlights works by Jennifer Garza-Cuen, Takahiro Kaneyama, Sara Macel, John Mann, Zanele Muholi, Flurina Rothenberger, Hrvoje Slovenc, Pacifico Silano, Maija Tammi, and Mila Teshaieva. The Light Work Collection is an extensive and diverse archive for the mapping of trends and developments in contemporary photography. This noteworthy collection includes all genres of expression found in contemporary photography, including documentary, abstract, experimental, and conceptual work.  Both exhibitions will be on view through December 14, 2017.

The opening reception will be held at Light Work in the Robert B. Menschel Media Center located on the Syracuse University campus at 316 Waverly Ave, Syracuse NY 13244.  FREE 2-hour parking is available directly across the street from the gallery on Waverly Avenue. Paid parking is available in the Booth Garage at the intersection of Comstock and Waverly Avenues, diagonally across the street from Light Work. This event is FREE and open to the public. Refreshments will be served. 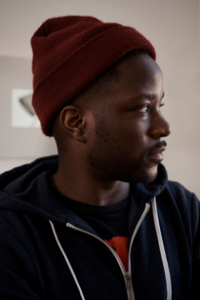 Recently named a  Young Artist to Watch in 2018 by ‘Cultured Magazine’ John Edmonds  is an artist working in photography whose practice includes fabric, video, and text. He received his MFA in Photography from Yale University School of Art and his BFA in Photography at the Corcoran School of Arts and Design. He is most recognized for his projects where he focused on the performative gestures and self-fashioning of young black men on the streets of America, as well as his evocative portraits of lovers, close friends, and strangers. He has held residencies at the Center of Photography at Woodstock, Woodstock, New York; The Skowhegan School of Painting & Sculpture, Skowhegan, Maine; FABRICA: The United Colors of Benneton’s Research Center, Treviso, Italy; and Light Work, Syracuse, New York. Edmonds lives and works in Brooklyn, New York.

“All the work that I make is from a very personal place,” says artist John Edmonds of his process. “It starts with me.” In his exhibition, Anonymous, Edmonds combines two distinct series of portraits—Hoods (2016) and Du-Rags (2017)— both of which conceal the identities of their subjects. Through a deceptively simple approach, Edmonds unveils the complex symbolism and meanings that are inherent in our wardrobe. Edmonds shows the power of hoods and du-rags as personal and cultural statements of protest, beauty, and pride. The photographs comprise striking formal studies of individuals wearing hoods on the street, photographed from behind. Edmonds further embeds himself in this work by photographing his subjects wearing his own hoodies and jackets. With little visual clues to guide us, we may only learn from the artist that the obscured individuals, in fact, vary in race, gender, and age. Another interesting aspect of Edmond’s pictures is that despite the anonymity, they are photographically descript. The portraits are made in the bright daylight and the clarity and detail of the fabric offers a sense of closeness, implicating the viewer with the feeling of approaching a stranger from behind. While acknowledging that his work begins from a personal place, Edmond’s emphasizes the necessity of the viewer in the completion of an image.

In contrast to the charged public space that Edmonds considers with these pictures, a second series of portraits celebrates blackness and beauty through private and sensual pictures of men wearing du-rags. Once again, Edmonds photographs his subjects from directly behind, depriving us of a view of their faces. We can trace the durag’s origin to the head-wraps that female slaves wore during the antebellum period, and later used to preserve hairstyles, but today both men and women wear du-rags as a symbol asserting cultural pride. In these portraits, a subtle melancholy underlies the majestic and spiritual quality that also comes forward and calls to mind totems and religious iconography.

For Edmonds, the personal is political: “I hope my work can reflect the reality of this country right now. Through my work, my ultimate desire as an artist is to re-situate what and whom we consider strange or familiar, and to confront taboos of looking in moments of reveal and non-reveal that arouse desire, dissonance, empathy, and anxiety in the viewer. Altogether, I aim to raise a mirror for the looker as a reminder that what you see is who you are.” We can quickly read his suite of images as a statement on the unjust death of Trayvon Martin and how individuals of color continue to face issues of racism, safety, and injustice in systemic ways. Through an emphasis on form and repetition, Edmond’s work engages viewers in conversations of visibility in society.