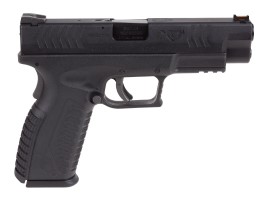 On March 31st, at approximately 8:40 PM, deputies responded to 823 Vine Street in the Town of Salina for a reported menacing that just occurred. Upon arrival, deputies met with the victim, a 24-year-old male, who advised that while attempting to serve family court documents to a resident at the address, a male exited the home, pointed a handgun at him and demanded that he leave the property.

Deputies located the suspect in the backyard of the residence where he was taken into custody without further incident. The handgun was recovered from inside the residence, which was later identified as a Springfield XDM .177 Caliber Air Gun.

The suspect, identified as 30-year-old David Laquidari of Liverpool, was charged with criminal possession of a weapon in the 4th degree, and menacing in the 2nd degree.

Laquidari was processed and released on an appearance ticket. He is scheduled to appear in the Town of Salina Court on June 10th.