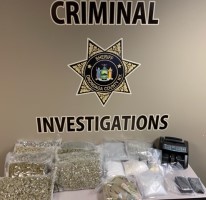 Following an initial anonymous tip, via TIP411 and in conjunction with the response to an increasing pattern of ketamine and ‘club’ drug induced incidents in the Central New York area, an investigation was initiated by members of the Onondaga County Sheriff’s Office Special Investigations Unit. During this investigation, a primary source of illicit substances was identified to be Natalie Brennan (35) of Liverpool.

Pursuant to lawful search warrants conducted during the second week of August, various quantities of illicit substances were located, to include but not limited to approximately 2.5 kilograms of ketamine, 2 ounces of cocaine, in excess of 175 doses of lysergic acid diethylamide (LSD), 5,682 grams of marijuana, scales and packaging materials.

Brennan was arraigned and released on her own recognizance. The investigation remains active and ongoing.