Joshua King Runs for Board of Education Vacancy in Jamesville-DeWitt School District Updated with Election Results.

The term of 3 incumbents will expire on June 30, therefore the Jamesville-DeWitt Board of Education May Election to fill these upcoming vacancies.

All Board of Education members in New York State must meet the following qualifications: be a qualified voter of the district who has been a district resident for at least one year, a U.S. citizen, a minimum of 18 years of age and able to read and write.

Anyone interested in running for the board had to submit a petition for nomination of a candidate. The number of signatures required to nominate a candidate is 25. The petition deadline was Wednesday, April 16. The election is tomorrow May 15th. 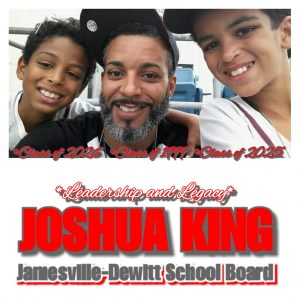 Local activist Joshua King is running for a position on the Jamesville-DeWitt Board of Education. The election is tomorrow May 15th. King is not new to education working with Believers Chapel City, People’s AME Zion Church, and now Southern Missionary Baptist Church youth programs. He went on to become a key supporter and volunteer for the Ben Walsh for Mayor Campaign in Syracuse. He was appointed to Mayor Walsh’s Education Transition Team, which led King to become a substitute teacher at SCSD, one of few POC who teaches all grades, all subjects, at all schools.  Representing many who are voiceless King would contribute a diverse perspective on education to the Jamesville-DeWitt Board of Education.

When fire destroyed 10 family apartment units, King organized disaster relief and helped the families 3. According to King, “This election is crucial, and if I do not win this seat, then our entire community misses out on the opportunity to finally have representation.  This is not about me; this is about all of those that are invisible or unheard in this district.  Our district is great, and I want to be a central part of making policies that will be a reflection of the excellence that is consistent with the mission of the JD School district.”

King continues, “My role in the community is to identify problems, develop solutions, and mobilize stakeholders in the process.  While managing this campaign to be elected, I have also been completing my semester in grad school, taking care of my ill mother, and raising 2 young black men in a district where they have no representation.  We cannot reach a level of full diversity, equity, and inclusion that seems to be the hottest topic in this race; without first making sure that everyone who needs to be a part of this discussion is participatory.  We have large pockets of our district, including the entire town of Dewitt that are not being considered in the decisions of the board.   There are also our impoverished neighborhoods, where hundreds of students reside, with a myriad of situations and circumstances that are compounding their educational experiences.  We are one of the only districts that have such vast diversity, without representation, including race, religion, culture, socioeconomic variance, citizenship, language and geographic barriers.  I am a graduate of this district, starting off at Moses Dewitt Elementary. Now as someone who is navigating this district with two students, it is important to me that all students have access and support to the richness of opportunities.” 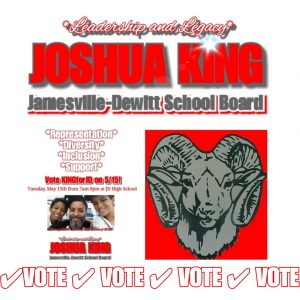 His role of advocacy has made him a leader in the HIV Awareness Campaign in New York State frequently traveling to different parts of the region being a voice and face for HIV awareness and never-ending efforts to educate the community.

His energy abounds as was shown as he participated in grass-roots organizing and action. King’s not one to sit on the sidelines waiting for someone else to act. He’s a “doer” someone who’s shown throughout the last few years the commitment and love of community, unmatched by many who simply go through the motions.

Results from the Board of Education Vote May 15th 2018