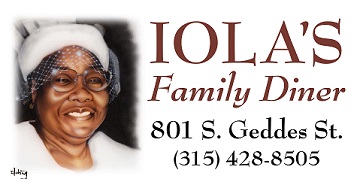 Iola’s Family Diner is a labor of love owned and operated by Joe Camber at 801 S. Geddes St. The West End eatery is named in honor of his grandmother, Iola Tarver (Harrell).

“My grandmother lived across the street from Nojaim’s,” Camber recalled. “She used to cook for her church and make dinners on the side. It used to taste so good that I told her, ‘One day I’m gonna get a place, and we’re gonna make some money with this food.’ But by the time I got an opportunity to get a place she had passed. She was gone for only three days before I got the opportunity. I thought maybe this was her gift to me. She’s here in spirit. I look up at the sign and she’s here.”

Now Iola’s Family Diner serves breakfast and lunch, and its customers’ favorite menu item is “Fish & Grits” followed by assorted sausages. Fish is served every day, and on Fridays there’s a Fish Fry Special that includes a fish sandwich and cole slaw for just $3.50.

Camber currently has his hands full making breakfasts and lunches, but he hopes to expand sometime in the not-too-distant future with soul food dinners. “My grandmother was into soul food, but we’re not there yet,” he said. “We have to perfect it. It has to be right.”

Anne is the cook who rules the kitchen. “She’s good at what she does with breakfast and lunch,” Camber beams as he describes his restaurant’s key staff. “I want people to enjoy the food as much as I want the person preparing the food to enjoy what they’re doing.”

Decorated in light blue with booths that can accommodate a group of patrons comfortably, Iola’s atmosphere makes customers feel right at home. There’s plenty of parking in front of the building, and the diner features a photograph of a smiling Iola looking down on her grandson’s tribute to her love.