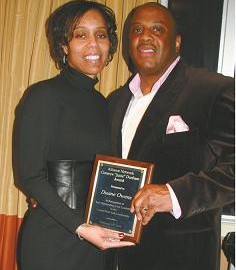 Duane B. Owens and his wife Tara Buchanan Owens at the Alliance Network awards ceremony at the top of the Marriott Hotel on Genesee Street in Syracuse. Duane received the Clarence “Junie” Dunham Award for Outstanding Civic Leadership in the CNY Community. Ellen Leahy photo

High atop the city on Saturday night Feb. 27 Syracuse’s Alliance Network (AN) was on track “Empowering Generation Next.” The event was strategically timed before the start of the SU men’s basketball romp with Villanova. Its annual awards were given out at the top of the Renaissance Hotel with a live orchestra playing R&B hits and guest politicians lending their voices to the effort to the back drop of a formal social mixer.

The AN began in 1996 when local leaders in the African American and people of color communities came together with business leaders, local activists and politicians to work on the combined needs of social, economic and physical welfare of all its citizens with an emphasis on youth. It’s founder Walter Dixie wrote, “The Alliance Network is simply a group of ordinary people who are committed to extraordinary change.”

Urban CNY editor, Ken Jackson, was in the house, he had this to say of Walter “Walt” Dixie:

“There are some who’ve doubted Walt Dixie’s effectiveness as a leader. Just the act of gathering a representative cross section of this community, a congressman, an assemblywoman, Mayor Miner, current and past members of the Syracuse Common Council and Onondaga County Legislature, proves his critics wrong. Being a leader means being up front facilitating change. That’s Walt Dixie walking in front while everybody else is taking notes. That’s what a leader does,” Jackson said (who is also a former Onondaga County Legislator).

Sharon Owens was on as the Mistress of Ceremony. “This room gives us and advantage to see how beautiful our city truly is.” She went on to warn the crowd that if we speak death and demise in our city; that is what we will get. But if we instead speak growth and prosperity, it will surely follow.

He then introduced the State Democratic Conference Leader, John L. Sampson, who is from Brooklyn. There was also an insinuation that the big game had enhanced his arrival to AN’s annual event. “We asked John Sampson to lead us when we needed to go in a different direction, and in six or seven months he has led the senate with courage and humility,” Valesky said.

Sampson said that people forget that we (the Democrat controlled legislature) inherited this mess. “We are nowhere near done,” he said. “(The task is) Not to talk about jobs but to create jobs.”

He said he understood that his job was to consider upstate as much as downstate and that people want action not words. He also said that Governor David Paterson deserved credit that New York did not go the way of California.

“Thanks to the Alliance, (there is) a voice for the voiceless and opportunity for those who didn’t have opportunity,” Sampson said.

“I don’t stand alone, I have some pretty big shoes to fill, but I am up to the challenge,” Wright-Williams said. “My intention is to follow in the steps of Miss Johnson to make sure we get our due; this is a right, not a gift.”

“The new mayor has tasked us with being there for all communities in Syracuse,” Perez-Williams said. “Let’s overcome challenges and concerns to make this a more vibrant community.”

While humbly accepting the award, Shepperd noted that he had two invitations for that evening. One to play in the Colgate alum basketball game, where he could have celebrated his accomplishments on campus, including beating Syracuse four times. Celebrating the accomplishments of the Alliance Network, however, gave Shepperd an opportunity to reflect on a career in the local community that began teaching 9th Grade English, coaching basketball and advising the school newspaper. He reminded the audience that some of them owed him homework from 1963, listing several names.

Exemplary Youth Awards were given to Melvin Baker and Julio Urrutia. Baker is a program director of Jubilee Homes in Syracuse. He has been working with the YouthBuild Program, which assists young men and women in obtaining a GED and certification in the construction trade.

Urrutia, who has a degree in International Relations from SU, is a community organizer with the Alliance of Communities Transforming Syracuse (ACTS). ACTS believes that human worth (dignity and justice) is a value worth fighting for. Julio is quoted as saying, “He couldn’t agree with them more.”

Christensen said, “I want to come back home, to get back to the people.”

She encouraged the audience to get involved no matter the obstacles. “When I wanted to run for office there were many obstacles put in my place; I didn’t have the money or the name recognition.”

Walter Dixie was the last to speak before the Benediction, reminding people “Be patient with our young people,” as leadership is conducted over a lifetime.

“You cannot be successful unless you are around successful people,” Dixie said.

Rev. Jonathan Stephens the Pastor from the Fountain of Life Church offered the final Benediction