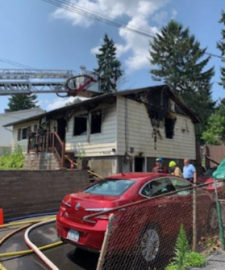 Town of Salina, New York – The Onondaga County Sheriff’s Office reports that Sheriff’s Deputies are investigating a house fire that occurred this morning in the town of Salina.

At approximately 11:05 a.m. this morning, Sheriff’s Deputies along with firefighters from the Lyncourt Fire Department and surrounding districts, responded to a reported house fire at 217 Snyder Avenue. Deputies investigating the fire report that there were two occupants inside when the home began filling with smoke. One occupant was able to escape but had to shatter a window to assist the second occupant out of the residence. Both were uninjured however their family dog is believed to have perished in the fire. It took firefighter approximately 30 minutes to get the fire under control and extinguished.

Deputies say the homeowner had been working on a motorcycle in the basement of the residence prior to the fire. The Onondaga County Fire Investigators are currently conducting an investigation into the exact cause of the fire.