The Syracuse Police Department is investigating a Shooting on W. Genesee St. On Sunday, September 30, 2018 at about 3:40 P.M, the Syracuse Police Department responded to the area of the 300 block of W. Genesee St. for a call of shots fired. As officers arrived, they learned that a 25 year old male shooting victim had driven himself to Upstate University Hospital in a private vehicle. The victim sustained two gunshot wounds to his left leg, which are considered non-life threatening. He was not cooperative with this investigation. 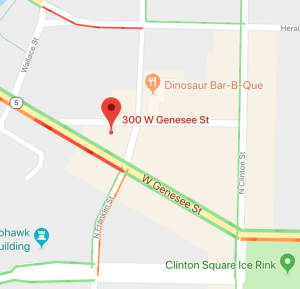 Witnesses at the scene told officers that there was some sort of an altercation before the victim was shot. The only information about the suspect, is that he is a younger Hispanic male. This investigation is active and ongoing. Further information will be released when it becomes available.

Anyone with information is asked to contact the Syracuse Police Department at 442-5222.  All calls will be kept confidential.  Anonymous information may also be submitted by using the “SPD Tips” App, available on Android and iPhones.