A Day of meetings and receptions as Nelson goes to Washington to conduct business, a guest at the State of the Union Address

Syracuse resident Mary Nelson, known for the center that bears her name; was the invited guest to President Trump’s State of the Union Address by Representative John Katko. State of the Union Day is filled with receptions and meetings, as constituents and special guests descend on Washington D.C. for this annual event.

Article II, section 3 of the U.S. Constitution requires the president to “give to Congress Information on the State of the Union.” Each year, one member of the president’s cabinet is absent from the address, to maintain the line of succession in case of an emergency.

As stated, before her departure, Mary Nelson was attending in her role as an advocate. Rep. Katko and Nelson met with representatives from the National Coalition against Domestic Violence during the afternoon, ahead of the SOTU. If you think being invited to the State of the Union is an easy fete, not very many people have had the honor.

Every member of Congress can bring one guest to the State of the Union address. The President may invite up to 24 guests with the First Lady in her box. Traditionally, these individuals have been invited because they have done something extraordinary. During his speech, the President introduces them and honors them for their achievements. 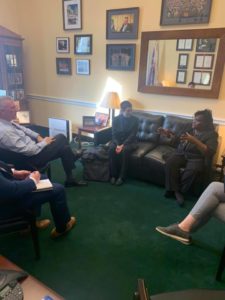 Rep. Katko and Nelson met with representatives from the National Coalition against Domestic Violence

The Speaker of the House may invite up to 24 guests in the Speaker’s box. In the message, the President is supposed to talk about important issues facing Americans and offers his ideas on solving the nation’s problems, including suggestions for new laws and policies.

It’s clear that Mary Nelson and John Katko have a special relationship that has nothing to do with politics. She has his ear, as he has hers. Agreeing with any political agenda is never on the table.

Even in turbulent times as these, it’s an honor to be a guest at the State of the Union. The question will be, what was gained by the visit?

Relationships, everything is about relationships, finding common ground becomes building blocks needed to move toward the higher goal. And for Nelson that higher goal is the continued operation of the center, the community, and her concern for victims of domestic violence.

The politics are for those to decide in November.