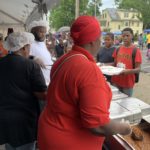 Upon arrival it became clear this was more than a back to school supply event, this was a collective community at work. There were so many forces working together for the common good, from individuals who dropped off donations to large organizations and corporations. Also, the “giveaway” included churches most notable- Abundant Life. Institutions like Upstate Medical University sent their mobile mammogram unit, Colgate provided a large vehicle that spent the day providing dental services, My Father’s Kitchen provided much needed items for participants, including shoes.

In addition, many prominent Central New Yorkers’ over preceding months have donated to a cause, that has only grown larger over its 18 years.

Don’t talk republican or democratic politics with Nelson, as she’ll tell you in a second, “this is about the children of this community, not politics”. As a result, political leaders and their families coming from opposing points of political view, can all agree on one thing; on this one day, Mary Nelson’s children come first. 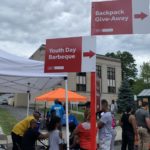 Signs made sure participants knew where to go. 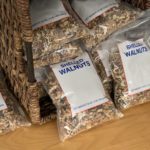 Fresh Fruit & Nuts were among the items distributed. 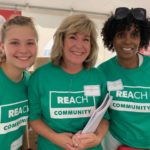 Volunteers pause to pose for a picture 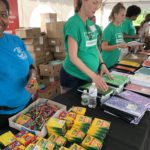 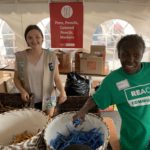 Each area was clearly designated 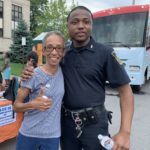 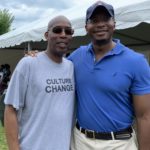 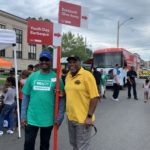 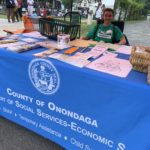 Onondaga County Department of Social services were there 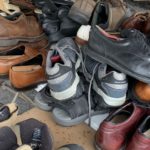 My Fathers Kitchen provided more than meals on this day 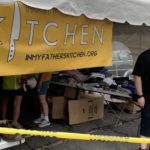 Coordination of clothing and other items 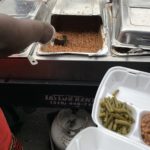 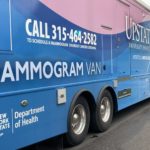 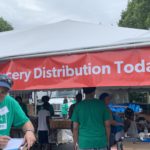 There was also a grocery distribution. 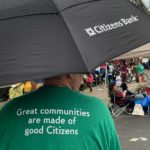 Summation of the event! 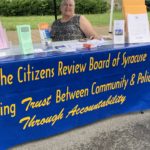 The CRB was represented 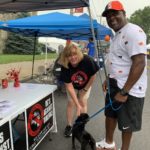 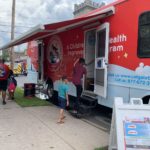 Colgate Dental unit was on hand to provide dental care. 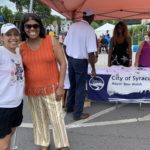 The City of Syracuse was well represented.

The day was planned with precision with signage pointing out where different stations were, making it easy for people to navigate the various stations. There was food, as there was a grocery distribution tent for those in need. The lines of mothers with young children patiently waiting and chatting as they multi-tasked feeding their children from the large free barbeque with all the fixin’s tent.

There was also a grocery distribution.

At the various school supply stations, participants were met by volunteers coordinating the distribution of every Backpack, pencil and pen donated by Central New York philanthropists and individuals.

In the Back-To-School supply area, there were signs identifying what was there, making it easy for volunteers to give out measured numbers of pens, pencils, notebooks; anything you can think of, there was a system in place to make sure people were served with respect, dignity and most evident a welcoming smile.

Summation of the event!

Dr. Rick Wright and Cora Thomas were MC’s for the event, as an array of local talent took to the stage. Gospel, Rap and other performers were giving the audience a real show as Brownskin Band opened the entertainment stage set up in Sankofa Park. There was something going on in every corner of Mary Nelson’s Back-To-School Supply Giveaway. More than a supply giveaway, Mary Nelson created a special annual neighborhood event that defies definition.

Shortly after 2:00 pm Severe Thunderstorm Warning Alerts began to appear on smartphones, soon torrential rains hit. While it may have dampened the streets, rain didn’t dampen the spirit of this special day that brought the city of Syracuse to a sometimes-challenged neighborhood to a small block, on the Southside in Peace and Love in the spirit of Dr. Martin Luther King’s Beloved Community.