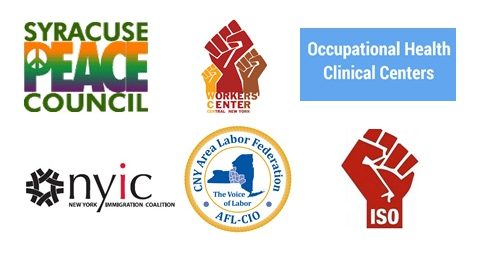 Syracuse, NY – On Tuesday, May 1st labor and immigrant rights organizations from will stand together, to fight for stronger rights and protections for immigrants and workers alike. The event will be in solidarity with May Day, also known as International Workers’ Day, celebrations across the country. Join us for a celebration of May Day, we will gather for speakers, music and food.

The international workers’ holiday, otherwise known as May Day, began in the United States in the 1870s with a demand to shorten the working day to eight hours. One national labor organization called for a nationwide general strike on May 1st, 1886, which brought out hundreds of thousands of strikers across the country. Today it continues to be a day of celebration and mobilization around the world.

As more immigrants have joined the U.S. working class and have organized for their rights, immigration laws have increasingly been used to fire union members and break up union drives. In response, the labor movement started speaking out in support of immigrants’ rights. On May 1st, 2006, millions of immigrant workers and labor allies poured into the streets in the Great American Boycott, walking off the job and marching against the anti-immigrant legislation being considered by Congress at the time.